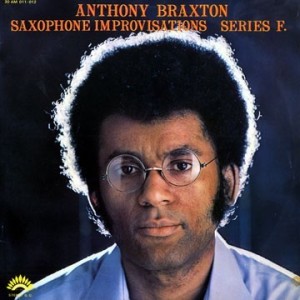 Anthony Braxton is a guy where either you appreciate his drive to create unique music with little or no commercial appeal, or you don’t.  You either admire his efforts to zig when everyone is expected to zag, or you don’t.  Another analogy: the question of coloring within the lines or not.  Braxton (hypothetically) colors in the lines sometimes, and sometimes not, but he’s also written two dozen new coloring books in the meantime, some of which have no lines whatsoever to color within or without, but he still says they are coloring books.

This album is similar in many ways to Dona Lee [Donna Lee], which was recorded just a week prior.  Though here there are only original compositions, no standards.  Also, rather than group material, this album is played entirely solo.  So comparisons to For Alto are sure to abound, though already Braxton’s sound had opened up a bit from that earlier recording, adding more lyrical elements to his abrupt, cold attack.  This album features compositions from his “Kelvin” series.  While those who seek out unique and uncompromising jazz will surely admire this, there is a sinking sensation that Braxton is trying to be self-consciously “different” and that holds it back just slightly.  His real breakthroughs as a performer and composer were still in the future, swiftly approaching.  This one is perhaps most appealing in how it demonstrates “how he got there.”  Choice tracks: “NR-12-C (33 M)” and “JMK-80 CFN-7.”