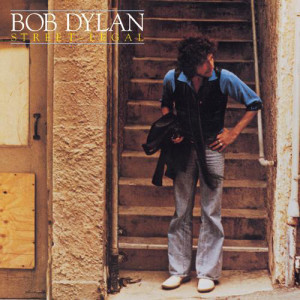 I’ve mentioned that Planet Waves was a bad omen.  I think, at the time, it could be passed off as just lazy, a fluke misfire on some fundamentally good songwriting material.  Street-Legal was something else.  Here, Dylan was confirming that he was a brat, someone just unwilling to look outside himself.  It’s clear what he was going for here.  The backing singers, saxophone.  This was a show band.  After struggling and failing to make The Rolling Thunder Revue a commercial success, he seemed to be aiming for an Elvis-style Vegas act (see also At Budokan).  Or maybe even some kind of second-hand Van Morrison approach, by way of Bruce Springsteen‘s E-Street Band.  But Dylan really wasn’t that kind of a performer.  He insisted on a “raw” sound recorded in some old warehouse dubbed “Rundown Studio” with temporary recording equipment set up with wires running out the window (similar to what was done on Elvis’ recent From Elvis Presley Boulevard, Memphis, Tennessee).  In principle, that kind of an approach might work, but not with this material and this band.   It’s as if Dylan just can’t commit himself to the commercial aspects of what his band proposes.  This is one of those albums where he struggles to come to terms with the expectations laid upon him, and so he self-sabotages the product.  A shame, too, because there are definitely some good new songs here, like “Señor (Tales of Yankee Power),” one of Dylan’s now rare attempts to do the kind of social and political commentary that he managed so adeptly back in his early folk days (“With God on Our Side,” etc.).  So, Street-Legal was probably one intervention away from being a success.  The committed will find things to like if they focus hard, but, at the same time, there is no excuse for the amount of effort necessary to appreciate this one.