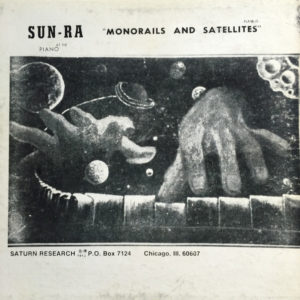 Sun Ra has been criticized by some as not being a great pianist.  His first album of solo piano recordings, Monorails and Satellites, probably won’t change any minds on that score.  The material here covers a broad spectrum, from dissonant avant-garde to melodic balladry.  The songs are different from what Sun Ra’s larger band was recording around the same time, so rather than being a new take on familiar forms these solo records represent an expansion of his palette.  Unfortunately, the performances are mediocre at best.  The most difficult material, like “Space Towers” and “Cogitation,” sounds like inferior renditions of compositions by Arnold Schönberg with added syncopation.  The ballads are a bit better, but often seem like the work of a merely adequate performer being self-consciously difficult to try to project himself beyond his means.  The most effective passages are where Sun Ra shows his versatility by playing stride piano and the like.  Monorails and Satellites probably won’t win any new fans.  Even longtime fans might find this difficult to enjoy.