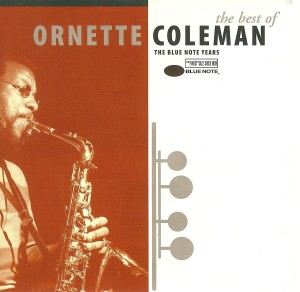 This could have been more aptly titled “The Best of the Worst.”  Ornette’s time with a recording contract for Blue Note came both when he was experimenting with new configurations of his music, and when Blue Note was just starting to drift into irrelevance.  Collected here are tracks from, in order of appearance, New York Is Now!, At The “Golden Circle” Stockholm, Volume One, The Empty Foxhole, and Jackie McLean‘s New and Old Gospel.  Recording as a leader, only the live Golden Circle album is really successful from this period, and it found Ornette re-stating and summarizing his past in a lighter trio setting.  Of the other tracks, “Broad Way Blues” is quite nice, even if it is a rather stiff performance of more transitional material that he bettered later on.  “Old Gospel” is from a rare album on which Ornette plays for another leader but doesn’t completely dominate the leader McLean.  All said, this collection is completely unnecessary, though perhaps it sheds some light on a much-maligned period of Ornette’s illustrious career.  Listeners should be warned that this is by no means representative of the man’s entire career.