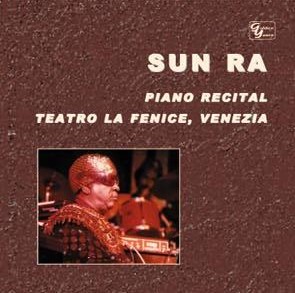 In all of the many, many recordings Sun Ra made over the course of about five decades of activity only a few were for solo piano.  Some listeners malign the solo stuff as weaker than the more widely known group recordings.  Personal opinions aside, solo piano albums like Monorails and Satellites and St. Louis Blues (and for the most part Solo Piano, Vol. 1 too) featured songs that Sun Ra’s larger bands didn’t play.  Ra’s solo material was simply different.  But the posthumously released Piano Recital dips into the Arkestra’s songbook for some favorites like “Love in Outer Space,” “Outer Spaceways Inc.,” and “Friendly Galaxy/ Spontaneous Simplicity.”  There also are some standards, like Fats Waller‘s “Honeysuckle Rose,” Billy Strayhorn‘s “Take the ‘A’ Train,” and a Cecil Taylor-esque read of Val Burton & Will Jason‘s “Penthouse Serenade” (popularized by Nat “King” Cole).  Sun Ra’s playing is a lot more assured than on Monorails and Satellites from a dozen years before.  Perhaps it was the live audience that made the difference.  In any event, he sounds relaxed and comfortable, and doesn’t strain to do anything out of character.  This album might be the best of the solo recordings.  It certainly is the only one that provides a crisp distillation of the familiar group material.  While still not an essential item, this should satisfy any looking for something in line with the solo piano concept.