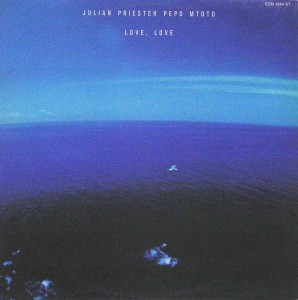 Love, Love has achieved something of a “lost classic” status, and deservedly so.  Priester extends the basic approach of Herbie Hancock‘s Mwandishi group, though Priester definitely goes a few steps further.  He finds an almost orchestral fluidity that the eclecticism of Hancock’s band seemed to preclude.  It’s also notable that the spacier moments here wouldn’t be out of place on Sun Ra‘s Lanquidity, though there is hardly any of Ra’s afro-futurist weirdness to be found.  The album’s first side finds the most distinct connections to the early fusion era, and blends in some of the more dense elements of Miles Davis‘ post-Bitches Brew work.  On side two, Priester moves into free jazz territory, but also incorporates elements of re-tooled big band music, foreshadowing David Murray‘s early 1980s music.  A rewarding listen that brings to mind what a shame it has been that Priester hasn’t recorded more as a leader.