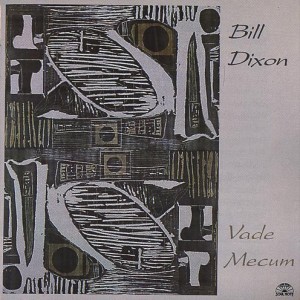 Bill Dixon was an interesting musician.  Dropping almost entirely out of the public eye for long stretches, his recorded legacy is quite modest for a talent of his stature.  His playing, on trumpet especially, unfolded slowly, full of space for contemplation.  He played like he had all the time in the world.  There really wasn’t any flash or any crowd-pleasing gimmickry.  It all came together in a way that made Dixon stand apart, with a style that was quite unlike any other in jazz.  That’s actually worth saying again. Dixon really represented a major, unique voice in modern jazz, as distinct and important as Ornette, Ayler, etc.  Although he was definitely part of the experimental wing of jazz players, his music wasn’t quite as difficult for conservative tastes as some other practitioners of the new thing.  There was an almost orchestral conception to what he did that makes his work palatable to listeners who appreciate Euro-classical music.  Here he plays trumpet with electronic processing.  But unlike most players using such effects on a wind instrument he doesn’t seems to take any influence from rock music.  Vade Mecum is well worth the effort for anyone interested in refreshingly original music.  It’s one of Dixon’s very best.