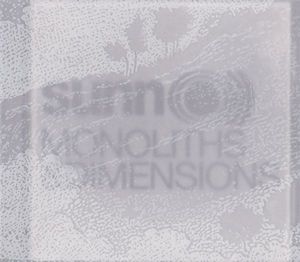 Uneven, yet also showing the promise that doom metal might be able to expand to entirely new territory.  First the bad, then the good.  The album’s weaknesses are that “Hunting & Gathering (Cydonia)” is a rather poor song and that the cheeseball vocals on “Aghartha” tarnish an otherwise decent song.  As for the good, “Big Church [megszentségteleníthetetlenségeskedéseitekért]” shows the band trying new things, in this case adding vocals that wouldn’t sound out of place on Steve Reich‘s The Desert Music.  The real highlight, though, is the closer “Alice”.  Rich in its sonics and surprisingly light on guitar rumble, it is something totally new.  Jazz legend Julian Priester makes a guest appearance, and perhaps the most astounding thing about Monoliths and Dimensions is that the last track makes comparisons to fusion, like Priester’s Love, Love, seem, if not directly relevant, like something plausible enough for consideration.  In the end, the good outweighs the bad, and at the very least this album opens a door for things yet to come, should the band be willing.