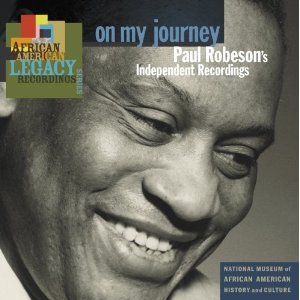 These were recordings made in the 1950s when Robeson was blacklisted during the cold war McCarthy witch hunt era.  He started his own label Othello Records and offered recordings on a subscription basis by way of the newspaper Freedom that he contributed to during that time.  His longtime arranger, accompanist and collaborator Lawrence Brown had largely stopped working with Robeson following a 1949 concert in Peekskill, NY in which an angry mob of idiots attacked the stage (to which Robeson responded in later concerts by surrounding himself on stage with unionists as bodyguards/bouncers, like his own Red Guards).  Instead, pianist Alan Booth is present on most of these recordings.  Booth was a competent pianist, but he didn’t have the deep connection that Brown had with Robeson. To complicate matters, any musicians that worked with Robeson during this time risked having their union card revoked (so much for unions supporting the working man), and even studios that gave Robeson recording time faced FBI harassment.  Under those circumstances, the mere existence of these recordings is impressive.  Yet, overall, they aren’t quite as good as Robeson’s earlier Columbia recordings.  There are still very fine performances here, like the stunning and resolute “Bear the Burden in the Heat of the Day” and “On Mah Journey Now, Mount Zion.”  There are fairly extensive and interesting liner notes with this release though, and a few tracks were previously unreleased.