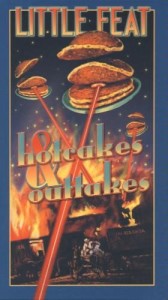 Disc one is a great summary of the reasons Little Feat was a fantastic band in their day.  Disc two charts their decline and transformation into a third- or fourth-tier jazz fusion outfit.  Disc three–barely listenable–tracks much of their post-Lowell George reunion.  Disc four is a collection of outtakes and rarities, including live takes and some Lowell George and The Factory cuts.  Disc one deserves five stars, even if I would love to see maybe a few more songs from the debut LP represented.  Disc two gets boring quickly.  Disc three, *sigh*, is a complete waste of space.  The group was churning out pretty formulaic “New Orleans” style boogie rock at that point, they rarely had a decent singer (though Shaun Murphy helped in that department), and most of all they didn’t have any good material to work with.  The thing about Little Feat was that Lowell George was that band.  As his influence in the band declined before his early death, the music declined in parallel.  Without him, the band was just uninspired.  There is an interesting quote in the liner notes though.  One of the band members talks about the reunion and ponders: how can they make it not seem like money-grubbing?  Answer: you don’t.  If it is truly only about the music, get together and play in your garage.

This set includes too much useless junk to recommend outright.  Feat fanatics may like the rarities and outtakes disc.  Ideally, though, stand-alone versions of just discs one and four would really be the ticket for newcomers and the fanatics.