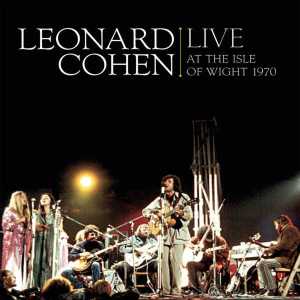 The third Isle of Wight music festival in 1970 was something of a disaster, with riotous gate-crashers disrupting many of the performances and with the stage and instruments being lit on fire.  Leonard Cohen, appearing with his band “The Army”, was featured toward the end of the festival.  He achieved what other performers had failed to do: to calm and captivate the unruly crowd.  “Let’s sing another song boys; this one has grown old and bitter.”

This recording (CD + DVD) captures his performances admirably.  Cohen wasn’t the most refined musician around.  He didn’t play guitar particularly well, and despite having an unmistakable voice he wasn’t the best of singers.  But this “Army” in 1970 (assembled by and featuring producer Bob Johnston) was arguably the best band he ever performed with.  The era when schmaltz crept into his music was still a few years off.  While the schlock of his later years bothers me a lot less than most listeners, there is no denying that Cohen’s bands often leave a lot to be desired.  With a few exceptions (Sharon Robinson, Jennifer Warnes), Cohen often surrounded himself with performers that would otherwise be playing for a sparse, disinterested crowd at the Holiday Inn’s Sunday brunch.  Yet, what some of the interviews on this DVD sketch out is the portrait of a guy who maybe wasn’t all that concerned with posterity.  He opted to be a decent guy on a personal level who supported his friends rather than becoming a cutthroat entrepreneur seeking only the finest performances with no sense of loyalty.  “But I have many friends, and some of them are with me.”

The Isle of Wight concert came shortly before the release of Cohen’s best album, Songs of Love and Hate.  He offers a few songs from that album, but mostly featured are songs from his first two albums.  Cohen is really a one-of-a-kind songwriter.  He is every bit the equal of a Bob Dylan or Townes Van Zandt as a lyricist, with the imagery and wordplay of Dylan intact but with the dark and harrowing personal focus of Van Zandt too.  Though he came up at the tail end of the urban folk movement, and was around through the whole singer-songwriter movement, he never quite fit the stereotype of any of those kinds of performers.  The wisdom in his words is a rare thing.  Even listening to his songs for the 1000th time, there is always something in the juxtaposition of his words and themes that comes out to surprise.  You always get the sense that Cohen just could see the world with clearer eyes, and could put across the trying aspects of life with an alacrity and charm that made it all seem so comfortable: “like a drunk in some old midnight choir.”

This might be the best live Cohen album available.  Sure, we all know the timing of this release has quite a bit to do with Cohen going broken not long before.  But there is no compromise in this music.  “It’s time that we began to laugh, and cry, and cry, and laugh about it all again.”