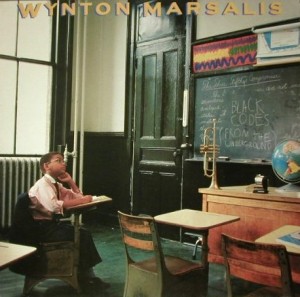 Wynton Marsalis has become the poster child of the conservative movement in post-1970s jazz, which tends to view the genre as something entirely mapped out with well defined boundaries that has survived certain “failed” formulations that are only worthy of being derided or ignored.  He is relied upon as the “definitive” musician-commentator on jazz.  And so he has been regularly featured in films, etc. pontificating about the meaning of the music as a whole.  Naturally he does so from within the narrow confines of his own definitions of what jazz is and should be.  And, naturally, I hate his fucking guts for that.  But Black Codes (From the Underground) is still a success.  In spite of its scarcely-concealed agenda of skipping over all jazz history since Miles Davis’ second great quintet from the mid-1960s, there is conviction behind it.  This doesn’t exactly wow or thrill me, or even surprise me.  I still have to admit that this is a good album.