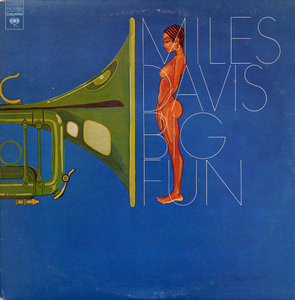 It is somewhat amazing to think that despite the intense creative peak Miles Davis achieved in the early 1970s, On the Corner from 1972 was the last proper studio album he consciously assembled for roughly ten years, until The Man With the Horn in 1981.  Everything in between was either archival in nature, a live recording, or, like Big Fun and Get Up With It, an amalgamation of leftovers spanning a period of many years.  When it comes to Big Fun, rather than taking the rather disparate material — from the moody, atmospheric “Great Expectations/Orange Lady” and “Lonely Fire” from the late-1960s Bitches Brew era to the grinding rock of “Go Ahead John” from the Jack Johnson period to the murky, paranoid, Eastern-flavored “Ife” that was recorded following the On the Corner sessions — and either accepting the incongruity or else massaging the material in the editing process to homogenize it, Davis and producer Teo Macero take a third path.  What happens is that they take raw material as if in a highly elemental form, and Macero uses studio effects and cut-and-paste techniques to transform a lot of it into something different than any of its origins.  This is perhaps most apparent in the harshly chopped and distorted editing of guitarist John McLaughlin‘s solo(s) and Jack DeJohnette‘s drums on “Go Ahead John.”  This was remarkable stuff.  The editing process was a conscious and audible part of the final work.  There were precedents.  Modern composers had made similar experiments.  For instance, German composer Karlheinz Stockhausen (whom Davis greatly admired) stitched together national anthems for his Hymnen, and Steve Reich chopped up a spoken word sample to create Come Out previously.  But Davis and Macero were taking those techniques and trying to apply them to popular music.  This was meant for the masses!

Often relegated to at best a second-class status, Big Fun is a better record than that spotted critical history suggests.  Yet it also isn’t the most immediately impressive entry into the long line of great 70s fusion albums from Miles.  Most listeners will perhaps want to put this further down the list of Davis albums of the period to check out.  But bear in mind that if anything from the period hooks you, you will almost inevitably seek out the rest, and Big Fun definitely earns its place in that search.  This has a more agitated and fiery flavor than the earliest of Davis fusion efforts in the late 1960s, but also a more ambient quality than much of the dense and funky early/mid 1970s recordings.  If there was a way to convey the tumult of the times, this would have to be it though.  It’s a record that isn’t always satisfying, at least not for more than moments.  If that sort of approach isn’t for you, then the album won’t necessarily be for you.