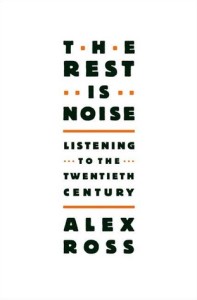 Alex Ross – The Rest Is Noise: Listening to the Twentieth Century (Farrar, Straus and Giroux 2007)

Ross brings a lot of enthusiasm to the subject of 20th Century classical composition in The Rest Is Noise. Unfortunately, that is one of the few highlights here. The book’s problems are many. It is probably a little too dense and heavy on music theory for many casual readers, but also too light and uncritical to make waves in a scholarly sense. Books of that sort tend to only succeed when the writing is taut and engaging. But this is too long by at least a third (a whole chapter on Britten, really?). Ross is also in desperate need of a fact-checker (he apparently doesn’t know what “stochastic” means, nor does he know why Angus MacLise left The Velvet Underground). Most fatally, though, Ross lacks an understanding of 20th Century socio-political and socio-economic circumstances, and so his attempts to reference music against those contexts range from the superficial to the very misguided. He comes across as to beholden to nationalistic, cold-war era Liberal paranoia. This makes the middle chapters on the periods around World War II a great chore. For example, no mater what Ross or anyone else thinks of him, Lenin was certainly not a prototype dictator of the 20th Century — Iran’s Shah would fit that description much better. When discussing Soviet music, he also seems fundamentally unable to distinguish the Stalin era from the Lenin one. It all makes sense in way, because Ross is merely trying to portray Shostakovitch as something other than a hack, and that helps Ross’ narrative. Another big flaw is the occidental outlook of everything. Although he name-drops a few non-Western and women composers towards the end, one can’t help but wonder why those names weren’t featured more substantively in the book. I wanted to like this but couldn’t help getting tired of it as I plodded through.