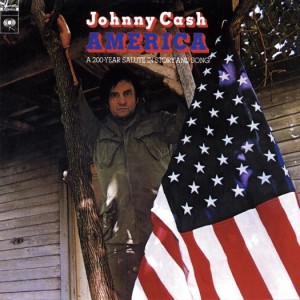 The early 1970s were a turbulent time in America, with the Watergate scandal, the Vietnam war, the biggest economic crisis the Western world had faced in many decades, continued fights to implement integration, women’s liberation, and much more.  Oh, and there was a lot of stuff happening to celebrate the 200-year anniversary of the nation’s independence from England in 1776.  Along comes Johnny Cash, with this album, depicting him on the cover in a military-style jacket on a decrepit farmhouse porch behind a flag, and subtitled “A 200-Year Salute in Story and Song”.  The theme is American history.  It looks pretty heavy-handed on paper.  The thing is, he does a pretty good job with this concept.  He re-records a few tunes he had done before, and performs an assortment of other songs, mostly new ones written himself.  There is a lot of between-song spoken dialog, and even a recitation of Abraham Lincoln’s Gettysburg Address.  Some of these tracks were recorded exclusively for the astronauts on the Apollo 14 space mission (the one where Alan Shepard hit golf balls on the Moon), but ended up here instead.  Like much of Cash’s early 70s output, the songs have a minimalist, folky feel, and there are only a couple of cuts with his trademark boom-chicka-boom rhythm (“Paul Revere,” “These Are My People”).  And while this looks a lot like a very rudimentary recitation of the standard “story of America” taught to little kids in grade school, it ends up being slightly more nuanced than that.  “Big Foot,” about the Wounded Knee Massacre, wasn’t something frequently taught in school history classes — would Cash have dug Howard Zinn’s A People’s History of the United States when it came out years later?  This release predated the Pine Ridge Incident, erupting in response to the anniversary of Wounded Knee, by only a matter of months.  Yet Cash elsewhere celebrates genocidal madmen like Christopher Columbus, so there are still contradictions.  Listeners who want Johnny in good voice, recorded well with a crisp and talented backing band will probably find lots to like here.  Those who focus on lyrics more than the instrumental contributions probably will care a lot less for this one.  In any event, this was one of Cash’s last concepts albums.