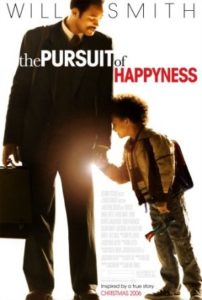 The Will Smith movie The Pursuit of Happyness, based on a memoir by Chris Gardner, is meant to be a heartwarming tale of overcoming adversity, and all that.  Of course, another way to view it is as a polemic of dubious realism and accuracy extolling the worldview of the wealthy (the book on which the film was based was written by someone who was a multimillionaire).  This is one long conservative trope, on film.

Will Smith plays a Navy veteran living with his wife (Thandie Newton) and son in San Francisco, trying to sell off an inventory of bone density scanners they purchased with their life savings while he pursues an unpaid internship at a securities and investment brokerage firm.  He struggles to sell his wares and to get a job interview.  His wife leaves (she is portrayed unsympathetically).  He demands that their son stay with him.  He does get the internship, after showing up to the interview in tattered closes covered in paint after being held in jail for an unpaid parking ticket.  But, as he undertakes the internship, he has little or no money.  He ends up homeless after the IRS attaches his bank account for failure to pay taxes.  He and his son live in a church-run homeless shelter.

The storyline is highly selective, implausible in places, and is mostly invested in isolated scenes of intensely emotional acting.  In other words, it is emotionally manipulative and counterfactual.  Numerous key scenes are deus ex machina — information available online suggests that the film modifies/distorts key real-life events.  Certainly, some scenes are simply implausible wholly apart from any origins in a memoir.  There is never any explanation given as to why the protagonist does not seek welfare or other public social services, or why he persists in pursuing an unpaid internship rather than another line of remunerative work (and, at least by today’s standards, the unpaid internship is illegal — the employer derives benefit form the interns cold-calling prospective clients, and the interns are judged by how many new clients they bring in).  Even the insistence that his son remain with him is not explained — could the mother provide for the son better?  But to the extent that some of this comes from a real memoir, it is worth bearing in mind here F. Scott Fitzgerald’s dictum from The Beautiful and Damned about how “the type of man who attains commercial success seldom knows how or why, and,…when he ascribes reasons, the reasons are generally inaccurate and absurd.”  In fact, Fitzgerald is a pretty good touchstone here, as few writers capture the banal depravity and moral shallowness of the strivers for material wealth so well.  The Beautiful and Damned, in particular, has only a slightly different story arc than The Pursuit of Happyness.  Yet they draw opposite conclusions.  In Fitzgerald’s tale the protagonists emerge scarred and damaged (“damned”).  In this film, the protagonist emerges triumphant.

Mostly, the film’s story is meant to emphasize the so-called “culture of poverty” theory/myth — that success or failure is determined primarily or exclusively by the degree an individual is committed to hard work and perseverance.  The film does not address racism in any way (despite how much that would affect the protagonist in real life).  It scrupulously avoids addressing any structural or institutional causes for the protagonist’s situation.  There is a single-minded focus on the success of the protagonist, with no concern whatsoever for the other homeless people shown in the film.  Audiences are expected to root for the protagonist to succeed, and are not supposed to analyze or question the other poverty around him, or why he is so devoted to a “winner take all” system.  When the IRS seizes the main character’s last bit of money in his bank account for failure to pay taxes (the film portrays it as a surprise to Smith’s character, which is utterly preposterous and misleading), there is a steadfast assumption that the government is unfairly taking his money — even as most of the film suggests his poverty would probably exempt him from income taxes (or is he really not as poor as the film lets on?).  Practically the entire discipline of sociology probably cringes at this film and the discredited ideology it flacks — Loïc Wacquant called this sort of thing “an old theoretical carcass periodically exhumed from the graveyard of stillborn concepts[.]”

One of the most groan-inducing moments is from the epilogue titles, in which it is conveyed that the real-life person on which the film is based later became rich.  This reveals the true heart of the film.  Everything before that was supposedly about the main character’s relationship with his son and being happy, but the ending titles suggest that it was really just about money all along.  After all, Thomas Jefferson adapted John Locke‘s crude protection of “life, liberty and estate” (Two Treatises of Government, Book II) into “life, liberty and the pursuit of happiness” for the Declaration of Independence, a slogan the main character mentions thinking about a lot.  Jefferson supposedly changed the wording to make it seem less crass, without intending to really change the meaning.  So this film actually gets that part right, in a strange way, by repeating the deception.

A film like I, Daniel Blake from a decade later is kind of the polar opposite of The Pursuit of Happyness.  The Blake film is a critique of the system, which is to say social and government institutions, whereas Happyness is sub-Horatio Alger rags-to-riches claptrap pushing a “social darwinist” myth of meritocracy.

Will Smith’s performance is actually quite good, as is that of his real-life son Jaden.  But it is ridiculous to focus on such performances when the film is as contrived as it is so as to provide disjointed individual scenes solely as vehicles for emoting by the lead actors. 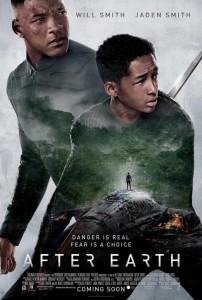