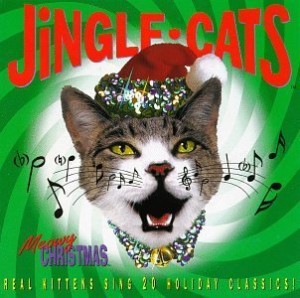 Human beings are capable of some pretty horrible things, and you don’t have to look very far into history to find the horrible acts of Adolph Hitler, Dick Cheney and Jerry Seinfeld.  But we also have achieved many wondrous, astounding things, from the Great Pyramid of Giza to the Great Wall of China (visible from space) to Rickrolling.  Meowy Christmas has to fall in that same category with the Pyramid, the Wall and Rickrolling, somewhere in between.  Personally, I once had a dream to rival any of those achievements.  It was a noble dream indeed: to have kittens sing songs.  It always seemed like a far off fantasy.  How could I really get cats to sing?  How many cats would it take?  Would the staggering genius of the whole thing turn my singers, little Fluffers, Fatty, Ceiling Cat and Sgt. Catnip, or any of the rest, into pompous celebrities just like Bono?  Could I live with myself for spreading the disease that is Bono to another species?  Could I ever hope to control a monstrosity like that once I had created it?  Was it even possible for something so wonderful to turn into something so evil?  Too many questions.  This seemed like playing with fire, like opening Pandora’s box.  And so the idea was filed away in the back of my mind, until we have the technology to control it.  I thought my mad secret was safe.  Oh how wrong I was.  As I blindly slumbered on this momentous concept, Mike Spalla came along and created The Jingle Cats (and Jingle Dogs!) to make “Real Kittens Sing 20 Holiday Classics!”  Spalla!  Damn you and your confounded synthesizer and handful of cat sounds!  You see, he beat me to it, I must confess.  The glorious bastard.  But it was the synthesizer all along.  HOW COULD I HAVE MISSED IT!  I saw that episode of The Cosby Show where Theo and Vanessa take the Huxtable family to meet Stevie Wonder.  That harmless situational comedy program emanating from my video box provided the crucial missing piece of the puzzle.  It was right there in front of me.  Only a few kitten sounds were needed.  That misunderstood electronic sound machine could do the rest; it could modulate the kittens’ voices to any pitch.  The keys could contain them.  All that would be left would be to fill in the music behind the voices, something as simple as Ed Wood dropping stock footage into Glen or Glenda.  But this isn’t over Spalla.  No, not by a long shot.  I can’t possibly reveal my secrets here.  It’s not the right forum.  Others won’t realize that it will be worth it to sacrifice Hasselhoff for the greater good.  Some might…misunderstand, yes.  But what I achieve will make singing kittens seem like child’s play.  Ah, no, I must contain myself if possible.  You will know when I have succeeded though.  You will be able to hear me scream, “Made it Ma, top of the world!”  And that day will come, so much sooner than you expect.  By the time you read this, I may have already succeeded.  I am already nearing Ankora, for a perfect Turkish Angora specimen will be essential to my plans.  But enough.  It will be more pleasant and useful to experience this revolution than to write about it.  I must go, for it has already begun!