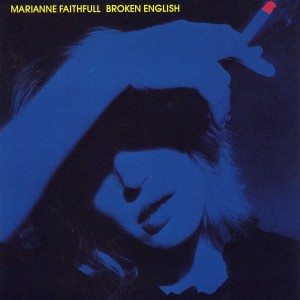 When rock and roll arrived in the 1950s, it was fundamentally a young person’s game.  It took a while, until a generation of people who came of age after the birth rock grew up, for rock to adapt to the context of — if not middle age — at least the age when the energy, idealism and intransigence of youth wear off.  So like a late 70s counterpart of Neil Young‘s Tonight’s the Night, and something of a partial precursor to Lou Reed‘s The Blue Mask, Broken English is a chronicle of trying to pull one’s self together at a time in life when there are plenty of mistakes to look back on.  You could maybe even throw Magazine‘s Secondhand Daylight into that category too.  There is no doubt this album sounds at least a little dated, with a tinge of the disco era lurking in the softened bass-heavy grooves.  Even if it doesn’t completely succeed, this album makes attempts at opening up new territories for rock music.  There is a sense of looking back and finding yourself to blame for every misstep and missed opportunity.  Imagine it this way: an effervescent and up-and-coming French chanson star is giddily on her way into a recording studio, but a coughing, wheezing figure walks out — nearly staggering — from a dark corner and with a gruff voice she offers a forbidding warning about how the future will really turn out, offering the disheartening forecast in…”broken English.”