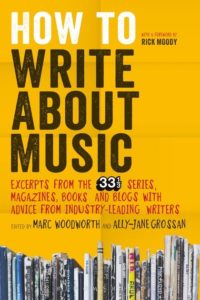 Marc Woodworth & Ally-Jane Grossan, Editors – How to Write About Music: Excerpts from the 33 1/3 Series, Magazines, Books and Blogs with Advice from Industry-leading Writers (Bloomsbury 2015)

The implicit premise of the book is really “how to get paid to write about popular music in a journalistic setting“.  This is not a book that talks about how to publish a book about music (biography, academic text, etc.).  It does not deal with getting a job writing the text for programs to euro-classical orchestral concerts, as just one more example.  While much of the book admirably tries to offer tips on the mechanics of writing for newspapers, magazines and large web sites, readers should bear in mind the underlying assumptions of the editors who put this together.

It is inevitable that all critics write from a certain cultural perspective.  Readers either share (or aspire to) that cultural perspective, or they don’t.  But more than that, professional critics for newspapers and magazines tend to get caught up in the economics of a popular music industry that, as a whole, makes money hyping one fad after another, covering the release of new recordings in order to generate demand for live performances.  The biggest problem this cultivates in critics is a tendency to foster a kind of privileged clique of insiders who are “up to date” on the latest fads.  Their writing accordingly spends as much — or more — effort developing and maintaining that sense of insider elitism as it does explaining and contextualizing the music that is ostensibly the focus of their written pieces.  A few contributors here acknowledge this and describe it as reasonable and inevitable.  But of course, it is neither of those things.  Yet writers do need to either choose the path of “professional” writing laid out in this book, or reject it, and only by overcoming the underlying assumptions and dictates of “capital”, that is, the large media businesses that pay professional music writers, can writers actively reject such dictates.  Of course, some writers are just shills who will say just about anything for a sufficiently large paycheck, or too dim-witted to comprehend what is going on.  But more insidious are those who simply internalize the dictates of their industry, constrained by dependence on their salary to not say anything against industry interests.  That can fairly be called “drinking the Kool-Aid.”  On the other hand, it is worth remembering that most critics who eschew remuneration do what they do to advocate for certain music against the commercial marketplace.  Critics often want to praise was has yet to or may never garner commercial success, which doesn’t necessarily reject elitism but merely shifts focus from an economic sphere toward a cultural/symbolic sphere.  So they don’t get off the hook so easily either.

Another aspect of this book is its liberalism.  Liberalism describes the political outlook of nearly all the contributors, and especially the editors.  There is a pervasive belief that the post-WWII golden years of the working class — the time when pop/rock journalism was first created — represents the norm.  Such an outlook is the embodiment of liberalism.  People on both the political left and right of liberalism see the post-WWII years in the global West as a historical anomaly — but with different subjective reactions.  On the Right, the post-WWII welfare state was a tragedy, and they make attempts to return to a new gilded age, or even to outright feudalism.  On the Left, there is a desire to re-attempt a Paris Commune or other egalitarian utopia, which the welfare state was an attempt to stave off.  While in places some contributors acknowledge that popular music criticism of the type the book emphasizes is a uniquely post-WWII creation, it definitely stops short of acknowledging any sort of coherent theory of why that is.  So questions like the following are outside its scope: is popular music largely a creation of the working class and, if so, wouldn’t bourgeois capital therefore want to suppress or undermine working class aspirations in the long-run by under-funding and co-opting musical criticism?  Before WWII, there was something known as the “Cultural Front” and the theories of “Cultural Hegemony” or a “Culture Industry,” or even of a “Leisure Class” that drew connections like this on the political left.  On the flip side, around WWII and the dawn of the welfare state, you have people on the political right like Ayn Rand writing The Fountainhead to advocate for toppling an existing aristocracy to (de facto) install another, with a firm insistence that the reasons for doing this cannot be questioned (because “A is A” and this is “objectivism”, among other nonsense retorts), followed after the war by the open attacks of the McCarthy witchhunts that largely succeeded in eliminating almost all viewpoints to the left of centrist liberalism.  With the ascendancy of conservatism during the neoliberal “austerity” age, the working class base for music criticism has shrunk along with the sort of journalistic outlets that went along with it.  In short, the economy as a whole has shifted away from the one that for a brief window of time supported a robust middle and working class base interested in “legitimate” popular music criticism (i.e., from a working/middle class perspective), and critics and readers seeking to bolster it during its decline necessarily see the conservative shift as a negative, while still retaining the elements of professional elitism that largely keeps them at a distance from the political left whose militancy once arguably brought about the conditions for it in the first place.

Anyway, the contributors to How to Write About Music surely have the editor’s implicit assumptions in mind.  Numerous contributors, for instance, mention writing on an amateur basis for free on a web site of your own creation.  Some even go so far as to praise the “democratization” that web sites provide in that respect (other contributors are clearly threatened by it).  They mention these things as they chafe against the narrowness of the questions posed to them by the editors of this book.  It is to the credit of the editors that they leave these things in the book that otherwise projects itself as a careerist “self-help” manual.

A number of contributors here make the same joke: in order to survive as a music writer, you should have a trust fund.  In other words, the means for making a living doing professional music criticism are limited at best.  Give up hoping against the odds!  But those jokes kind of avoid the larger implications.  Mostly, this book is about the mechanics of the current music industry: how to submit a successful proposal to an editor, how to take notes for a concert review, examples of the most common formats for the most common things editors publish.  And much of that discussion is pretty shallow.  Most writers will intuitively understand that you can prepare to write a concert review by bringing a notepad to the concert and scrawling some notes, expanding upon them later.  The more interesting of these discussions of industry mechanics describe the editorial process and the various defenses of the status quo offered by editors who retain a large degree of control in that arena.  A pragmatic take-home message, once summarized obliquely by David Graeber, is that you only get to do what you want (write about music!) if before and above that you are a salesperson.  If you cannot “sell” (pitch) to editors effectively, you will be denied access to the largest mass-media publishing platforms.  End of story.  Those parts of the book resemble Chad Harbach‘s MFA Vs NYC The Two Cultures Of American Fiction, which detailed the two leading commercial hubs in the United States for fiction publishing (see also the companion e-book, Vanity Fair’s How a Book is Born: The Making of The Art of Fielding by Keith Gessen).  The editorial pitch process is driven by emotional “gut” reactions, not rational decision-making, and there is absolutely nothing like a meritocracy in play.  Abrose Bierce once offered a definition that explains a lot here with regard to the way editors serve the interests of the owners of media publications: “LICKSPITTLE, n. A useful functionary, not infrequently found editing a newspaper . . .  .”  The editors of How to Write About Music do not intend to make that topic the focus of this book, and certainly never question editors who go along to get along in a non-meritocratic system, but at the edges this emerges and the occasional statements along these lines provide some of the most valuable information documented here.  Yet implicit in much of the book is a crude and tentative attempt to disabuse readers of the myth of a meritocracy in the world of published music writing.

The writing samples, culled from books, magazines, etc. are generally underwhelming. This reviewer has been largely unimpressed with the 33 1/3 book series, which seems to range from tedious drivel to the mediocre, with a few exceptions.  It is therefore unsurprising that a book by and about music writers this reviewer finds to be mostly bad or mediocre would have limited appeal.  Even excerpts drawn from places beyond the 33 1/3 book series are no better, and tend to be from the likes of Alex Ross and other writers working for urban liberal publications, especially a few web sites like The Quietus (which this reviewer has largely dismissed as uninteresting liberal multiculturalist blather).