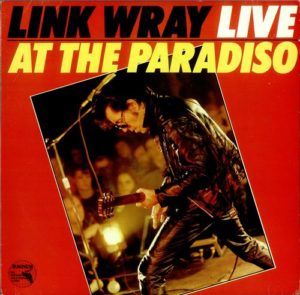 Link Wray had an amazingly varied rock ‘n roll career.  His early hit “Rumble” practically redefined rock guitar, introducing fuzz and distortion as desirable qualities.  But he found little momentum in the years immediately after that, pursuing more surf-styled garage rock (Jack the Ripper, the “Missing Links” series) while also flirting with more clean-cut teen idol pop/rock (White Lightning: Lost Cadence Sessions ’58).  Then by the late 1960s he briefly considered hippie rock (Yesterday — Today), before delivering a cult classic of swamp rock, Link Wray, and continuing in a country-rock vein (Be What You Want To) in the early 1970s.  Then, along with a stint backing rockabilly crooner Robert Gordon, he transitioned to a slick hard rock sound in the mid/late 70s (Stuck in Gear).  His rather good Bullshot featured a mostly modern rock sound, with a versatile band.  That was followed by the concert recording, Live at the Paradiso.  If the rest of his career drifted into retro revivalism, it still seemed worthwhile in that he kept the flame alive and stuck to a path that was good-natured and earnest — and at times quite decent (Barbed Wire).  But maybe there was something more to the way he doggedly stuck with elements of rural elements in his music.

Point nine in the list of demands in The Communist Manifesto (1848) by Karl Marx and Friedrich Engels asked for:

“gradual abolition of all the distinction between town and country by a more equable distribution of the populace over the country.”

In a related way, one can look at purely urban “rock” (not “rock ‘n’ roll”) styles as being isolated from rural music.  Of course, there have been a few artists who have tried to bridge this gap.  Names like Ricky Nelson belong in that conversation.  But so does Link Wray.  (Much of the “country rock” and “insurgent country” genres — though certainly not all — actually doesn’t belong, given that these are mostly examples of ways that bourgeois urban artists appropriated and co-opted rural musical techniques while undermining any actual rural perspective).

Live at the Paradiso follows through with the hard rock sheen of Bullshot, drawing on heavy metal and even maybe slicker punk rock.  There are plenty of Wray’s old hits or quasi-hits here (“Rumble,” “Rawhide”), plus some other early rock ‘n’ roll classics (“Shake, Rattle and Roll,” “Blue Suede Shoes,” “Be-Bop-a-Lula“).  Even if nothing here reaches the heights of the single “It’s All Over Now Baby Blue” from Bullshot, it’s all pretty good from start to finish.  There is plenty of energy (not a given, considering that Wray had one lung removed long ago and was 50 years old when he cut this record). But what shines through is an attempt to bridge the realms of urban and rural music, without subordinating one to the other.  There is just something very likeable about this music, which doesn’t impose itself but stands firmly in its own place. 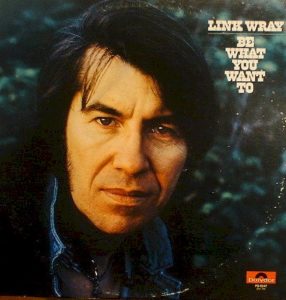 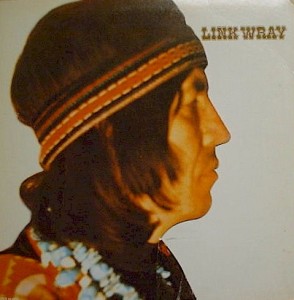 It is often the case that musical innovators languish in obscurity, or something close to it.  In rock, there are examples all over, like The Velvet Underground.  Link Wray is another.  He is best known for his raw 1958 instrumental classic “Rumble,” which paved the way for The Kinks‘s “You Really Got Me,” Pete Townshend‘s monster guitar power riffing with The Who, and much of the surf-rock genre.  But commercial success didn’t really come his way.  “Rumble” was something of a flash in the pan hit, but after recording a whole album of prime material, his clean-cut label dropped him without releasing his recordings — a story that might have been quite different if Wray had somehow found his way to the attention of Sun Records.  He bounced to a few other labels, but the momentum from “Rumble” was largely lost and soon the moment had passed to other sounds.  He became something of a footnote in rock history: the guy who added raw, improvised (as in makeshift) distortion to rock guitar.

If all you know of Link Wray is “Rumble,” or some excellent if now little-known follow-up instrumentals like “Raw-Hide,” “Jack the Ripper” and “Fat Back,” or even his later career efforts like Barbed Wire that modernized his original sound without losing the raw energy, Link Wray might be a surprise.  It sounds nothing like Wray’s signature early instrumental rock.  This is music that bears more resemblances to the country rock of The Basement Tapes by Bob Dylan & The Band crossed with the swampy southern rock of Creedence Clearwater Revival or Dr. John, but with searching, moody and almost existential songwriting of the kind that showed up later in the decade on Dennis Wilson‘s cult classic Pacific Ocean Blue.  Link Wray is the blueprint for The Rolling Stones‘s Exile on Main St.  Wray’s soulful vocals recall Felix Cavaliere of The Rascals.  That is no small feat.  Link Wray’s early recordings were instrumentals for a reason: he had his left lung removed after contracting tuberculosis (consumption) during military service in the Korean War.

By the dawn of the 1970s the center of gravity for rock — and by extension all pop music — was shifting away from New York City and Britain toward California.  West Coast studios were ahead of their Eastern peers in adopting more elaborate recording technologies and techniques.  The very sound of rock music was also growing more complex and intricate, with symphonic rock, rock operas, glam and prog gaining steam.  Even just within the realm of singer-songwriters, the more overtly produced and orchestrated styles of the likes of Elton John and Randy Newman were overtaking the simpler, mostly acoustic folk of popular 60s performers epitomized by Joan Baez.  Amidst all that Link Wray was yet again cutting against the grain of the industry establishment.  He set up his own three-track studio in a converted chicken coop on his family’s farm in Accokeek, Maryland.  In that setting he experimented with his own sound in relative seclusion (as with The Basement Tapes).  He recorded this in that primitive fashion.  The album is no joke.  It exudes complete honesty, even to the point of being somewhat blunt and ungainly at times.  But Wray’s lethargic guitar sounds just fine in a georgic setting far removed from his characteristic power chords.  Muffled piano and vocal choruses bolster the hopeful messages nestled in the murky, indistinct sound.  Link Wray is a little beauty that deserves another look, hopefully someday to be rescued from the obscure and dusty corners of early 70s rock.