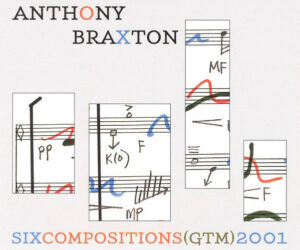 One of the best of Braxton’s ghost trance music (GTM) recordings.  At over three-and-half hours in length, originally spread over four CDs, this is yet another mammoth collection of music.  The opener, “Composition 286,” is the clear highlight.  Blending nods to classic jazz with skronky fee jazz solos, this species of GTM offers the best of both worlds.  The characteristic pulsed rhythms of GTM are fully present but leavened with lots of individualized contributions and less of a mechanical adherence to unison group statements.  It demonstrates the flexibility of GTM.  That track might actually be one of the best places to dip a toe in the waters of GTM.  It is massive unto itself, clocking in at over 90 minutes (spread across four parts and two CDs).  Basically it is, alone, a symphonic-length piece.  “Composition 277” and “Composition 287” continue on in a similar vein without hitting the brakes. These first three compositions, which make up three-quarters of the entire collection, pack quite a punch.  The crispness of the studio setting captures every detail while allowing for crystal clear moments of silence that enable the performances to breathe.

The last CD of the original release does disappoint, however.  “Composition 278” may be a change of pace but its lethargic pace has the effect of bringing the proceedings to a halt.  “Composition 289” does little to improve the situation.  The closer, “Composition 195,” a duet between Braxton and guitarist John Shiurba, offers only a marginal improvement.  What the last three tracks demonstrate is that GTM struggles to succeed with small combos, and sometimes fares better with a larger combo or ensemble.  Although, other small combo recordings like GTM (Syntax) 2003 and Composition N. 247 disprove that notion, and suggest instead that the real problem here is that with small combos the music has to have a greater density than the fairly sparse approach used here.  At most, these last few tracks, “Comp. 195” in particular, offer a kind of granular exposition of the basic elements of the music, but the results come across as fairly pedantic.  Still, if listeners experience this collection by skipping the last disc or treating it as featuring mere bonus tracks, they are left with a whole lot of impressive music.