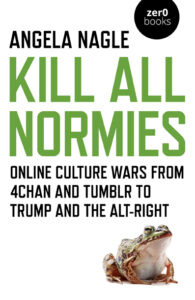 Angela Nagle – Kill All Normies: Online Culture Wars from 4chan and Tumblr to Trump and the Alt-Right (zero Books 2017)

Angela Nagle has written a rather important book on the rise of the so-called “alt-right” and its online origins and activities, including its ascendancy in more conventional corporate mass media (termed the “alt-light”).  First, let me state a few of my reservations about the book.  It is short.  I would call it a “hot take” on the topic, meant to be a topical history of recent and still ongoing events.  As such, the book’s brevity and concision sometimes lead to prose that can feel a bit cluttered.  Passing references to terms like “Gramscian” and “Overton window”, plus cursory references to any number of theorists and academics by name, might not be immediately understandable to some.  And, of course, her minimal descriptions of various online forums and the companies operating them might baffle readers who have never spent time on those sites (or any like them), especially reading the book in hindsight.  Being so short, the book also doesn’t touch on certain related topics like the law enforcement response — or lack thereof — to the extremist (if not outright terroristic) tactics of the alt-right.  As others have noted, better copyediting, sourcing, and the addition of an index would help too.  But all these are minor complaints.  Nagle’s analysis is pretty much spot-on.  Even if her references/sources are passing ones in the text, rather than explicit citations, she is pretty well-versed in theory and late 20th Century history and that comes through in the book.  She relies on the likes of Walter Benn Michaels, Adolph Reed, Jr., Mark Fisher, Pierre Bourdieu, and others to ground her analysis.  If there is a crux to her overall argument, it is probably this:

“It is sometimes said that the right won the economic war and the left won the culture war.  And as political theorist Walter Benn Michaels has argued, it is the recognition of identity that has triumphed over economic equality as the organizing principle of the Anglo-American liberal left and of mainstream discourse more broadly.

“In full agreement with him, I would also argue that the most recent rise of the online right is evidence of the triumph of the identity politics of the right and of the co-opting (but nevertheless the triumph) of 60s left styles of transgression and counterculture.  The libertinism, individualism, bourgeois bohemianism, postmodernism, irony and ultimately the nihilism that the left was once accused of by the right actually characterized the movement [of the alt-light].”  (p. 57)

This explanation of how the political right co-opted the “transgressive” style of the political left is perhaps the central achievement of the book.  She explains how the alt-right try to create an isolated community through the use of elitist insider knowledge plus cruelty and bullying — she wonderfully analogizes this to exclusionary musical subcultures (another unmentioned example might be the tactics of “hoarders”, which, surprisingly, have parallels with the ideas of leftists like Jean Genet, who wrote in Journal du voleur [The Thief’s Journal]: “Repudiating the virtues of your world, criminals hopelessly agree to organize a forbidden universe. They agree to live in it. The air there is nauseating: they can breathe it.”).  But here it is worth paying close attention to her terminology because “Anglo-American liberal left” is really a reference to “left neoliberals” or “progressive neoliberals” (or even the “pseudo-left” or “Fukuyama left”), which is to say the left-ish wing of centrist liberalism, not the “left” as in communists, anarchists, and anarcho-syndicalists.  At points in the book she draws out this distinction by differentiating the “materialist” left from the “liberal” left — though this could have been made more consistently clear.

The book astutely notes how Judith Butler’s style of politically correct (historicist) identity politics (which Nagle associates with the web site Tumblr) has been a principal target of the alt-right in this culture war (which she associates with sites like 4chan).  Nagle points out how contemporary identity politics tends to involve a classic neoliberal maneuver of creating “scarcity” of virtue, as a way of making virtue signaling (trigger warnings, no-platforming anti-free speech crusades, call-out culture, public demonstrations of sensitivity, etc.) a commodity of sorts; specifically, making signs of virtue into “cultural capital” — adopting a term derived from Bourdieu.  She makes a case for how the identity politics crowd are basically a bunch of ineffectual narcissists, unwilling or unable to actually fight the political right because they are both committed to depoliticized passivity and are overwhelmed by constantly striving to distinguish themselves from the historical left.  Here she is more or less tacitly in line with Domenico Losurdo’s critique of liberalism as a politics of exclusion as well as Alain Badiou’s views about the fate of contemporary girls (and boys).  Of course, she is also quite clear on the alt-right’s more explicit desire to annihilate its opponents and its rejection of liberal depoliticalization (following Carl Schmitt).  There is an old saying about bringing a knife to a gun fight, and Nagle contextualizes how, metaphorically, the (neo)liberal left is (irrationally and stupidly) bringing only a white handkerchief to waive in a political gunfight.

In a later interview she said, “Ruthless competitive individualism is being applied to the romantic and private realm and it’s deeply anti-social.”  Describing the “manosphere” (online anti-feminist subcultures) in this book, she echoes the French concept of ressentiment as well as Merton’s “Strain Theory”, writing:

“I think [F. Roger Devlin (the alt-right writer, white nationalist, men’s rights activist, and anti-feminist)] is getting to the central issue driving this kind of reactionary sexual politics, perhaps even the central personal motivation behind the entire turn to the far right among young men.  The sexual revolution that started the decline of lifelong marriage has produced great freedom from the shackles of loveless marriage and selfless duty to the family for both men and women.  But this ever-extended adolescence has also brought with it the rise of adult childlessness and a steep sexual hierarchy.  Sexual patterns that have emerged as a result of the decline of monogamy have seen a greater level of sexual choice for an elite of men and a growing celibacy among a large male population at the bottom of the pecking order.  Their own anxiety and anger about their low-ranking status in this hierarchy is precisely what has produced their hard-line rhetoric about asserting hierarchy in the world politically when it comes to women and non-whites.  The pain of relentless rejection has festered in these forums and allowed them to be the masters of the cruel natural hierarchies that bring them so much humiliation.” (pp. 97-98).

Lest the import of the last quoted sentence be lost, she is saying that the (male) alt-right are masters of experiencing pain and rejection and humiliation and they turn that mastery into a cudgel to batter other groups with — in a profoundly regressive and loathsome way.  It is these sorts of observations that make the book so worthwhile.  Ultimately, Nagle is willing to recognize numerous problems with identity politics and is willing to concede that certain strains of feminism became co-opted by neoliberalism and/or have lost sight of egalitarian ideals of fairness and (at lest occasionally) succumbed to reductionist antagonism, intolerance, and dogmatism (or perhaps what has been called “gyno-pessimism”).  She still considers herself a feminist, though the term “post-feminist” might fit her position better.  If I were to sum up what makes her insights so significant, it is that she completely avoids the sort of “beautiful soul” grandstanding that seeks to merely use the loathsome cruelty of the alt-right to make a case for its own moral superiority, something that characterizes the Standard Liberal Response to this cultural/historical phenomenon.  Rather, she makes a genuine effort to try to understand the underlying grievances and motivations (e.g., desire for solidarity/community/a stable sense of place) that have fostered resentments, as well as to point out how the genuine (“materialist”) political left has been hollowed out leaving a kind of vacuum that has allowed obscene far-right characters to posit troubling “solutions” to these grievances without real opposition — something like the truism attributed to Walter Benjamin:  behind every rise of fascism lies a failed (left) revolution.  And this is an incredible important thesis.  Nagle is partly here a sympathetic critic of the political (“materialist”) left, recognizing that it has lost many key battles, is lacking in headcount, and has made some tactical and theoretical blunders, but she still believes that there is something worth saving and fighting for on the left that is fundamentally opposed to both the political right and the (left-liberal) political center — which too often bears responsibility for the conditions that have provoked the alt-right’s backlash.

“When we’ve reached a point where the idea of being edgy/countercultural/transgressive can place fascists in a position of moral superiority to regular people, we may seriously want to rethink the value of these stale and outworn countercultural ideals.” (p. 108).

Does this mean that even the intentionally crude (lo-fi) cultural tactics embodied in, say, musical artifacts like Alex Chilton’s 1979 album Like Flies on Sherbert, and scores of punk-era recordings, or later albums like Flipper’s Public Flipper Limited, Pavement’s Slanted and Enchanted or the grungy nihilism of Nirvana’s Nevermind or their song “Rape Me” plotted the wrong course?  Or that Jean Genet’s writing and activism has some problematic limitations?  Perhaps.  In any event this is Nagle’s profound suggestion for the political left to reconsider (and improve) its tactics, which might not mean abandoning them completely so much as refining them to try to prevent misuse and misappropriation.

It does seem like the world needs more books like this that intervene in ongoing events from a left perspective before all the stakes are entirely clear and the dust has already settled.  Parts of her analysis won’t be easy to take but that is precisely because that analysis is so incisive.  Nagle has really highlighted key aspects of how the political left can and should win over people who would otherwise support, now or in the future, the political right, rather than simply labeling them a “basket of deplorables” or making simplistic and hypocritical criticisms of “toxic masculinity” (etc.) and then pursuing an exclusionary politics of toxic identitarianism that relies on constructing a huge portion of the population as an enemy.