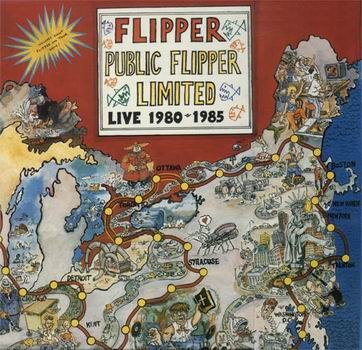 Flipper was one of the great rock bands of the 1980s.  Often times the alternative and grunge rock scenes of the 1990s are described as a group of young people rejecting a bourgeois lifestyle.  This is most pronounced when young adults choose to be downwardly mobile from a middle or upper-middle class lifestyle to a lower-middle or lower class lifestyle when options to be more upwardly-mobile were available — this explains some hostility to “hipsters” (doing the same) by those who aspire to what the hipsters reject.  Anyway, Flipper was there first, of course.  There is definitely something aggressive about Flipper’s quite explicit indifference to all expectations.  “Ambition” is like a foreign word.  But this all has a point.  Flipper present a very political approach to life that is an alternative but equally “violent” tactic as Mahatma Gandhi‘s civil disobedience.  Some explanation is due.  Modern thinkers can call Gandhi “violent” in the sense that he challenged the “structural violence” of a society that was premised on exploitation and disenfranchisement of many, in other words a social structure that accepted and indeed promoted as a base foundation the conditions of sweatshops, extreme poverty and other deplorable conditions.  Flipper’s aesthetic built upon the rejection of that “structural violence”.  What made them great though, was that they built up a whole new vocabulary of sleazy, indifferent, non-cooperation that didn’t rely on the regular features of pop and rock.  When on “Life” they sing repeatedly, “Life is the only thing worth living for,” it recalls Motörhead absurdly singing, “Killed by death,” but more daringly turns new age positive thinking into a kind of empty, meaningless slogan.  Awesome.  Major record labels, like all big businesses in their own ways, are dependent upon the creative talent of musicians to exploit it to turn a profit.  By expressing no viable “talent” in the conventional sense, Flipper could exist outside of that system.  Yet, they were very talented, because you’d have to be to come up with a song like “Sex Bomb,” and because there is such a creative consistency in what they did through the 1980s.  But it was a talent that was useless to the big music industry.  The slogan on the band’s touring van was “Flipper suffer for their music – now it’s your turn.”   Most of the world couldn’t image why anyone would subject themselves to this music.  That’s only because of a lack of imagination of their part though.  So, of course, Public Flipper Limited is an inspiration to the rest of us.