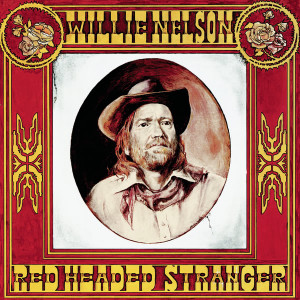 After garnering his first taste of real success as a recording artist by switching to Atlantic Records in the early 1970s, Atlantic promptly closed up its fledgling country division.  This left Willie to find a new label.  He landed at none other than Columbia, home of Johnny Cash.  As Columbia pondered what to do with Nelson, he showed up with a complete album he recorded off on his own, Red Headed Stranger.  His third wife Connie had suggested he record a song he sung to his children and that he had often performed when he worked as a radio DJ prior to any success in the music business.  From that beginning, he crafted a loose concept album around the story of an Old West preacher who kills his wife and a romantic rival.  Willie had garnered his recent success by fusing elements of rock and soul music, and elaborate suites of music.  Red Headed Stranger was something else entirely.  Stripped down to just the barest accompaniment, this was music that reached back more than looked forward.  Most of the music dwells in the same rural, time-worn songwriting of The Carter Family, that has the feel of being written, sung, rewritten, sung again, and lived in for years.  These are songs about dealing with the vagarities of life and its inevitable tribulations.  There are touches of western swing added at times.  Sometimes this reaches even further back, as with “O’er the Waves” (“Sobre las Olas”) the famous Mexican composition from the 19th Century.  There are some slower, romanticized passages too, that give this a modern sheen.  For the most part, though, this album could well have been recorded in the early 1930s.  This is hard country.  But it’s also the best kind of country music: plain and from the heart.  This is the album that made Willie a superstar and a household name.