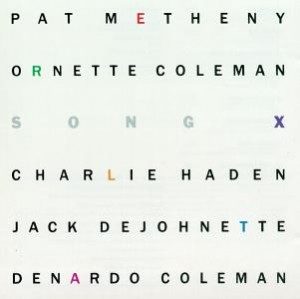 Song X paired Ornette Coleman with the relatively popular guitarist Pat Metheny, augmented by the multifaceted drummer Jack DeJohnette and Coleman’s frequent collaborators Denardo Coleman and Charlie Haden.  Metheny’s music –primarily from his band the Pat Metheny Group — is sometimes derisively referred to as “fuzak”, meaning a kind of jazz/rock fusion that is so dull and unengaging that it resembles “Musak” brand piped-in background music.  But whatever might be said about his solo recordings, he really rises to the challenge of playing with Ornette here.  For his part, Ornette returns to a style of playing and writing that hadn’t been heard much since the 1960s.  These songs have clear melodic content, not just repeatable riffs like with his Prime Time band, and the guitar and saxophone play together in harmony.  DeJohnette is great.  It is somewhat a shame that this is the only recording of Ornette playing with him.  While the cliched 1980s production values are a bit unfortunate, they don’t detract too much from what are otherwise uniformly good performances. I think that is really the key to this album’s success.  It doesn’t devote its energies to inventing some kind of “new style” or musical theory.  It instead presents excellent new compositions that expand upon the old styles/theories and the musicians all play to the best of their abilities.  Anthony Braxton came up with a useful three-part taxonomy for musicians and their work, which was not meant to favor any particular category or categories: restructuralists (i.e., innovators and game-changers), stylists (i.e., expanding on an established framework with a uniquely identifiable perspective), and traditionalists (i.e., preserving and faithfully recreating the language and techniques of the past).  Song X represents these musicians performing as “stylists”, even as Ornette had elsewhere established himself as a “restructuralist”.  Metheny and Coleman supposedly butted heads when recording the album, in a friendly, constructive way.  It seems that friction prevented either of them from coasting on a past reputation, and works in favor of the resulting album.

This is probably my favorite of Ornette’s 1980s albums.  I can’t say I’m familiar enough with Metheny to offer a similar comparative view, though this is certainly much better than his prior solo effort Rejoicing (which featured Haden and Billy Higgins, both of whom played with Ornette in the past).  Most listeners will want to seek out the expanded Twentieth Anniversary Edition of the album, which adds some very decent bonus tracks.