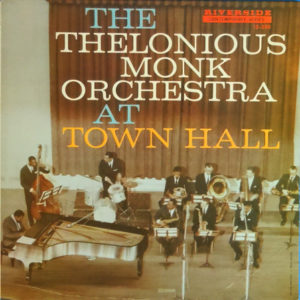 Here’s a great album, if also one that can easily be forgotten among other great jazz material by Monk and others of his era.  It is yet another one of those Monk albums with a familiar selection of his tunes he had recorded before.  But this performance is different.  This is a large band (orchestra), a dectet filled with top-notch players.  This would be long-time collaborator Charlie Rouse‘s first recording with Monk.  The band rehearsed extensively — rehearsals started at 3 AM, after the performers finished regular gigs at clubs, and ran until morning. That effort payed off.  This is a crisp performance for being the group’s public debut.

Monk came up in the be-bop era, which worked somewhat against the trends of “big bands” of the swing era.  So this is a somewhat incongruous staging of his music.  But it works.  A big reason for its success is that the large horn section is used to fill out and enliven the tunes without overdoing it or depriving the songs of the qualities that make them great when performed by a small combo.  The arrangements are somewhat streamlined harmonically, to accentuate the melodic and rhythmic elements.  Yet the harmonics have a subtlety to them that totally subverts the sort of highbrow pretensions that might have been employed instead.  Max Harrison once wrote,

“Thelonious Monk works so exclusively with the most basic materials of jazz that, in the best moments, his playing almost becomes a working definition of that music.  Monk’s pianistic strength lies not in complex executive feats but in a sensitive, vividly incisive deployment of those basics; time, accent, metre, space[.]”

The idiosyncratic phrasings and percussive attacks that immediately identify Monk’s own piano playing are here, with the orchestra hewing closely to a typical Monk performance.  Yet the sonic fabric is different.  It expands into places a piano can’t go.  The players retain some freedom too.  The performances breathe like jazz.

The arrangements are by Hall Overton. They are superb.  Overton and Monk worked closely together to refine everything.  “Little Rootie Tootie” is maybe the most intriguing of the arrangements, with a punchiness and brightness that puts a really unique spin on the tune.

The first time I heard about this album was a mention in the book The Jazz Loft Project, which noted Monk rehearsing at Overton’s loft, located in the same building where photographer and jazz buff W. Eugene Smith lived.  Smith recorded rehearsals — excerpts are heard on this podcast.

All things considered, At Town Hall can count itself among Monk’s best albums.  In a sense, it foreshadows some of the ways avant garde jazz would continue to experiment with large bands in the coming decade (The Jazz Composer’s Orchestra, etc.).  Big Band and Quartet in Concert would reprise the style of this album a few years later, with Overton again arranging.