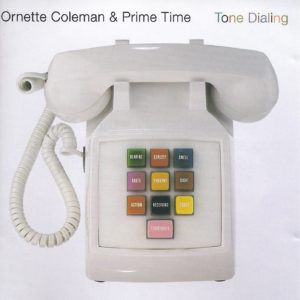 Tone Dialing was the final Ornette Coleman album credited to his band Prime Time.  That was just as well.  This has some things going for it, and it is pleasant enough, but few would name it as their favorite Ornette album and it makes a few missteps. Even though Virgin Beauty had already presented a more conservative and scaled-back version of Prime Time’s music, and it can be argued that the entire ethic of Prime Time was a rhythmic simplification of Ornette’s music, Tone Dialing more than any other of his albums really feels like Ornette is overtly chasing current fads.  Mostly that comes in the form of some attempts at jazz/hip-hop fusion (“Street Blues,” “Search for Life,” “Sound Is Everywhere”).  There were many such attempts in the 1990s (Buckshot Lefonque, etc.), and most are cringe-inducing in hindsight.  Ornette’s attempts may not rank among his finest moments on record, but “Search for Life” has a kind of beat generation vibe that actually works well.  The funk/R&B and sufi trance sound of early Prime Time is mostly absent here.  Instead, some songs mine territory a bit more like Song X.  So there is a new version of “Kathelin Gray” with piano-effect keyboard playing that is okay, and the new song “Family Reunion” is one of the better things here.  The title track fits that category too.  There is a genteel sound to much of this, perhaps because most of the band members were now classically trained.  On the other hand, “Bach Prelude” (a performance of J.S. Bach‘s Prelude from Cello Suite No. 1) might be the single worst track in Ornette’s entire discography.  It is not nearly as clever or significant for Ornette to play a Euro-classical piece in his own way as he apparently thought it was — there is an awful David Fricke Rolling Stone review of the album in which basically everything he says about the album is precisely wrong, including praise for the Bach number and criticism of “Search for Life.”  There are a few songs with various elements of global folk music mixed in (“Guadalupe,” “Miguel’s Fortune,” “Badal”).  Listeners may not know what to do with those.  They aren’t bad, but they aren’t really highlights either.  The album’s production values leave something to be desired too, with synths and trebly guitar sounds, and a thin and hollow sound overall.  This album is so all over the place that it is quite hard to make sense of of it as a whole.  That may be part of Ornette’s intent, though it makes this a strange listen.  Its most annoying aspect is that it sometimes seems to utilize disparate musical contexts as a substitute for interesting musical statements within those contexts.  It is as if Ornette is making the argument that he is no longer an outsider threatening the status quo, but instead someone connected enough to all sorts of currents running through the global music scene that he should be seen as part of the mainstream.  That isn’t as compelling a premise as the freedom-motivated premise of his early work.  I happen to like this more than most people, but — unlike most other Ornette recordings — primarily as background music.

The release of this album was rather curious.  First pressings were sent to reviewers and critics with a puzzle that when assembled spelled out the message, “remove the caste system from sound.”  Coleman’s quest for purely egalitarian music has always been admirable.  But in terms of how he went about that, from at least the mid-1970, there was an element of self-serving bias and self-indulgence.  In a dissertation, Nathan Frink wrote about what seemed to be Ornette’s objectives:

“He, the composer, is the only one who can determine how the instrumentation of his ensemble should function, what pieces they can play, and how those instruments should sound. In other words, artistic choices should be left in the hands of the artist and not the expectations of the audience (or anyone else for that matter). When talking about Tone Dialing in particular, it seemed that Coleman was especially interested in targeting the critics in terms of how and why they controlled information and formed cultural taste.”

In a way, although there are some similarities here to Theodor Adorno‘s critique of the “culture industry,” this seems less like an egalitarian vision of music and more like the worldview of the main character in the far right-wing libertarian novelist Ayn Rand‘s The Fountainhead, who maligns a critic because he deems himself to be great and therefore anyone who disagrees is necessarily wrong — his self-assessment is unreviewable and incontestable, despite the obvious self-serving bias at work.  In other words, it sounds a bit like an endorsement of a regressive “social darwinist” worldview, with Ornette wanting an “equal opportunity” to be seen as better than others, which he has already presupposed.  It is curious, and really somewhat hypocritical, in that Ornette wants to to eliminate one kind of inequality in order to advance another kind of “celebrity culture” inequality, with him unsurprisingly ending up as a celebrity.  He has slid somewhat from the anarchistic underpinnings of his early work to libertarianism.  Anyway, in the real world, artists do what they do in large part because of audiences and critics, who legitimize and consecrate the artist’s activities.  If the artist does not desire such social validations, the artist can create in private.  Though, on the other hand, the idea that all assertions of power should be accepted does have a radical edge to it, assuming it is extended universally to all people and not just to made available to a small group of people selected based on pre-determined criteria bracketed out of the discussion.

Frink also discussed the Bach piece on Tone Dialing, asserting, “Simply by placing the Bach piece in a different sonic context, Coleman had completely changed its character.”  I must question this statement.  The assertion reminds me of an important hypothetical given by the late sociologist Pierre Bourdieu in the book Language & Symbolic Power.  Bourdieu discusses the christening of a new ship, in which a town mayor was to read a speech and break a bottle of champagne on the ship’s hull.  What if, before the planned event, a random person sneaks up and reads script for the mayor’s speech and breaks the champagne bottle on the ship’s hull?  Is the ship christened, or does the other person lack the symbolic authority to do so?  It is easy to detect in Ornette’s worldview a tendency to completely reject symbolic power and authority, like that of the mayor in this hypothetical example.  Certainly, he seems to agree, in the context of dismissing critics, with Bourdieu’s statements that “[t]he strategy of condescension consists in deriving profit from the objective relations of power . . .”  and against the “illusion of linguistic communism” (the myth that that everyone shares the wealth of their language equally, without regard for the economic and social conditions of the acquisition of “legitimate” competence).  But he does so in kind of a naively utopian way (what some call the “anarchist delusion”), by expecting the symbolic power of certain groups to “legitimate” activities to simply disappear.  This is basically the issue discussed in Lenin‘s The State and Revolution in which a very coherent argument is made that (state and class) power can’t just wither away, but must first be smashed on behalf of the oppressed, and only after a long time and much enlightenment of the general population can class and state powers wither away.  Like most anarchists, and also a few libertarians, Ornette attempts an end run around the underlying political deadlocks with a utopian wish for the immediate withering away of power structures.

These are nonetheless complex matters.  I’m reminded here of a comment that Caetano Veloso made in his memoir Tropical Truth.  As his music was growing increasingly experimental in the early-to-mid-1970s, he came to the conclusion that he had a duty to make music with wider popular appeal.  This seems like a worthy notion.  And yet, Veloso’s music from that point on was far less memorable.  I grapple with the same sort of dilemmas when listening to Ornette’s later Prime Time recordings.  Ornette was clearly reaching out to popular audiences, but did he abandon a connection to significance in the process?

Tone Dialing has some interesting qualities, but on the whole it is something of a bottom-tier Ornette album.