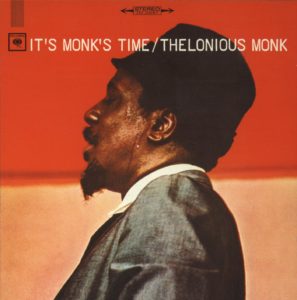 Monk’s years on the Columbia label were mostly marked by restatements of his earlier innovations.  His prime years were mostly behind him.  It’s Monk’s Time might be my second favorite of his Columbia studio albums, after Monk’s Dream, both of which are edged out by the awesome posthumous archival live recording Live at the It Club (especially the “complete” two-disc version).  The band is in good form — Charlie Rouse has a great boisterous, stuttering solo on “Brake’s Sake” — and Monk himself is playing well — much more strongly than on his last album Criss-Cross, and with a number of thoughtful, unaccompanied segments.  This is the mature Monk, and he sounds right at home in that role.  The album is half semi-obscure Monk originals (all previously recorded) and half standards.  It makes for a good mix.  This is strangely one of the lesser-known Monk albums on Columbia, but it is actually one of his better ones on the label.