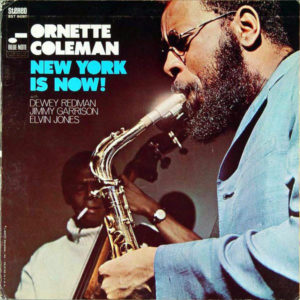 As much as I find a lot of individual elements of this music rewarding, New York Is Now! never quite comes together as well as it could.  “Broad Way Blues” is a catchy, memorable tune.  The opener “The Garden of Souls” has a lot going for it too.  Ornette’s playing is pretty good throughout — especially on “The Garden of Souls.”  Dewey Redman makes some solid contributions too.  But the nagging problem is basically the same one that plagued Ornette’s early albums for Contemporary Records: the rhythm section just isn’t right.  Often the rhythm section seems to be operating in a different world than Ornette and Redman.  Jimmy Garrison is on bass.  He had played with Ornette in the early 60s, but on these sessions he is hostile and uncooperative.  Elvin Jones is a great drummer, just not the right kind of drummer for this music.  He’s a little too uptight.  This was recorded in the spring of 1968, and live recordings made over the next twelve months for the Impulse! label would prove more effective, thanks to a different rhythm section — though Ornette has some arguably stronger moments in his own playing here.  Now, had these sessions featured Henry Grimes on bass and Rashied Ali on drums, that might have been something.  Or even if some of the songs featured Ornette unaccompanied, or just with Redman.

I came to this album after hearing Joe Lovano and Greg Osby‘s version of “Broad Way Blues” on Friendly Fire and I wanted to check out the original recording.  I can’t say I’ve ever returned to the Lovano/Osby version.  But I don’t return to Ornette’s late 1960s small combo recordings much either—it’s a period that has always perplexed and frustrated me, with too many failed experiments and tentative half-measures.  After hearing Lovano/Osby, then Ornette’s original, I found myself gravitating more to Change of the Century, which was an Ornette album readily available to me at the time.