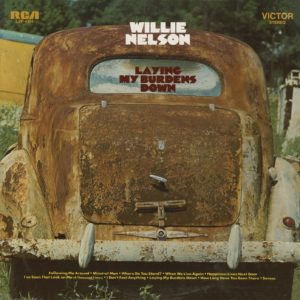 In the late 1960s and early 1970s Willie Nelson’s album displayed a clear interest in what was happening in rock/pop music. He had a few years of national touring under his belt, and had been exposed to the wider world somewhat. His records still adhered to the dictates of the Nashville system, but tried to combine Nashville country with pop/rock. The thing was, these were somewhat timid attempts. Willie latched on to only the most conservative pop of the day.  He also still clung to an old-fashioned way of singing for the most part. It was as if he took a correspondence course on how to be a successful singer and he dutifully followed a list of instructions that included “Enunciate clearly.” In a way, he still sang like a louder, southern Bing Crosby or Frank Sinatra.  After his Nashville home burned, and he and his band briefly relocated to Texas under communal conditions, he finally did summon the courage to try bolder things with his music. That eventually led him to Atlantic Records in New York, where he made a string of classic albums and achieved stardom.

Laying My Burdens Down displays clear attempts to look beyond country music.  The results aren’t as awkward as on the following year’s Willie Nelson & Family, but they are cheesier.  The backing vocals retain a little of the classic Nashville feel, though they make overt attempts to combine pentecostal gospel chorus and 5th Dimension-style pop affectations.  The horn arrangements lean heavily on the style of Herb Alpert & The Tijuana Brass.  Willie does play his acoustic guitar Trigger some, but also an overbearing electric guitar much of the time.  In general, his guitar playing is aimless and confused.  The guitar ranges from being overbearing to indistinctly cluttered.  The strings are fine, if a little cheesy.  Willie’s vocals show signs of moving beyond the old crooning style, but only tentatively.  It would be a few more years before his vocals settled into the style that helped make him a superstar.  This album isn’t terrible.  It still is a lesser Nelson effort.  Some of the backing vocals and other orchestration was stripped away on a few songs for Naked Willie, released almost four decades later, which provides a somewhat contrasting perspective.  It is curious to think about how Willie’s interests in rock and the counterculture were problematic because he was a southern outsider, not able (if willing) to step into that milieu directly, but also having no one at his Nashville-based record label able (if willing) to help him connect with the predominantly northern rock music world.  Willie was kind of stuck between two incompatible worlds — a bit like the film Electra Glide in Blue from a few years later.  So this remains a transitional effort that pales in comparison to what hindsight shows was just around the corner.  Yet this does retain some kitsch value.