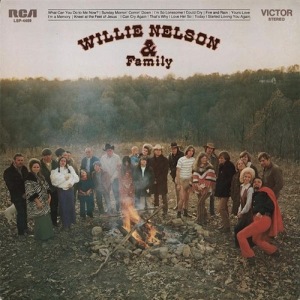 Another middling offering from the time just before Willie really broke through.  He veers into the territory of singer-songwriters, with a cover of James Taylor‘s hit “Fire and Rain.”  The nagging problem is that Willie is making this music too grandiose, and is still clinging slightly to a crooner’s style in his vocals.  That, and the glitzy, Vegas-style backing singers, horns and strings on “I’m a Memory,” “Today I Started Loving You Again,” and “Kneel at the Fee of Jesus” seem too much for Willie’s style of guitar playing and singing.  Rather than take simple, spare music and dress it up as he does here, his next album Yesterday’s Wine would instead strip things back to simple, spare performances with greater success.  This plays well enough all the way through, and is better than some of Willie’s early Nashville albums, but it still pales in comparison to what was just around the corner from him.