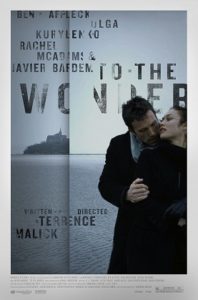 In a way, this film is perhaps the most abstract possible art house take on a typical daytime soap opera, and also the most beautifully photographed.  Terrence Malick continues to structure his films through the fragmented flashback approach of The Tree of Life.  Though here he takes up the challenge of applying his penchant for beautiful images to a setting of dingy exurban American neighborhoods, with their imposing power line towers, rivers contaminated with toxic waste, and nearby landfills.  But To the Wonder is as much pastiche and tribute as anything.  There are the metonymns of Michelangelo Antonioni, especially in the American exurban southern plains settings with their bleak declining economic prospects — some of these bits of the plot resemble the contemporaneous The Promised Land — which parallel the relationship of the protagonists.  There is also ample reference to late-period Godard — the long shots of sunsets and water, a bit like Helas pour moi, the “mature” and “boring” relationship focus of Sauve qui peut (la vie) and Goodbye to Language (which actually came out later), or even his 1971 TV commercial for aftershave.  Following Robert Bresson, the performers in the film are more like “models” than “actors”.  Neil (Affleck) barely says a word the entire film, which is fine.  In fact, aside from disembodied voice-overs (mostly in French), there is almost no dialog between on-screen characters at all.

This film, if nothing else, is about emotion and desire.  The characters struggle to control and take responsibility for their own desires.  What do they want their lives to mean?  While it is tempting to look at Marina’s (Kurylenko’s) catholic faith as an affirmation of accepting religion to guide her, Malick does problematize her religious faith somewhat.  Her prior marriage is held against her by the church.  She perhaps wants the church to guarantee meaning in her life.  She seems to give up that futile hope somewhere along the way.  The Father Quintana (Bardem) character, though pasted onto the main story a bit, is key.  The presentation is indelicate, with its parade of downtrodden figures presented near the conclusion of the film, but when Quintana goes around to help the poor and marginalized, he simply does it without any recognition or even any sorrow.  And this character (who perhaps speaks as much or more than any other in the film, aside from the voice-overs) always helps others and asks them to persevere in working with each other.  He often does these things to a congregation of just a few people, the pews mostly empty.  One of his parishioners tells him she prays for him to have joy, because he seems to have none.  But his perspective, a rather unfashionable one, seems to connect with the two main characters by the end of the film.  They at least pause to reconsider their visions of romantic relationships, and commit to work at them.

The perspective Malick seems to put forward might be explained with reference to G.K. Chesterton‘s “Introduction to the Book of Job,” about the old testament biblical character of Job.

“God will make Job see a startling universe if He can only do it by making Job see an idiotic universe. To startle man God becomes for an instant a blasphemer; one might almost say that God becomes for an instant an atheist. He unrolls before Job a long panorama of created things, the horse, the eagle, the raven, the wild ass, the peacock, the ostrich, the crocodile. He so describes each of them that it sounds like a monster walking in the sun. The whole is a sort of psalm or rhapsody of the sense of wonder. The maker of all things is astonished at the things He has Himself made. This we may call the third point. Job puts forward a note of interrogation; God answers with a note of exclamation. Instead of proving to Job that it is an explicable world, He insists that it is a much stranger world than Job ever thought it was.  ***  Here in this Book the question is really asked whether God invariably punishes vice with terrestrial punishment and rewards virtue with terrestrial prosperity. If the Jews had answered that question wrongly they might have lost all their after influence in human history. They might have sunk even down to the level of modern well educated society. For when once people have begun to believe that prosperity is the reward of virtue their next calamity is obvious. If prosperity is regarded as the reward of virtue it will be regarded as the symptom of virtue. Men will leave off the heavy task of making good men successful. They will adopt the easier task of making out successful men good.  *** The Book of Job is chiefly remarkable . . . for the fact that it does not end in a way that is conventionally satisfactory. Job is not told that his misfortunes were due to his sins or a part of any plan for his improvement.”

The way Chesterton interprets to story of Job is to say that when Job demands an explanation from god about why he suffered so, god responds with a “that’s such a ‘first world’ problem” sort of answer!  It isn’t that god operates on a level beyond human understanding, which is the more conventional interpretation of the story, or even that suffering is ennobling through some connection to sin or a plan for improvement.  Job’s suffering and misfortune is insignificant in a universe full of such things.  Nature is simply full of misery.  And so it is with Neil and Marina.  Yes their relationship is fraught, but of what importance is their failure to hold together a stupid, happy nuclear family in the face of a universe of (much greater) suffering?

This point is underscored, in a different way, in a scene in which Marina’s friend walks through a neighborhood with her, and suggests she make a calculated bid for her own happiness, just the way Chesterton suggests that god’s explanation of the creation of the universe is blasphemous, a kind of calculated wager in which god performs all sorts of selfish acts in preparation for his own battle of armageddon without much concern for the suffering inflicted along the way.  Marina ultimately doesn’t accept that sort of narcissism, though she toys with it briefly.

There is an amazing unfinished novella by Andrey Platonov titled Happy Moscow, in which a parachutist — a glamorous occupation in its 1920s Soviet Union setting — named Moscow Chestnova goes to work building a subway and is maimed, then goes to live with a derelict and helps him get on with his bleak life.  The story is so compelling because of its arc away from personal achievement and recognition.  Chestnova accepts the lowest possible social position and helps others as a kind of gray duty.  She finds nothing unhappy in a landscape usually considered dystopian.  This is what “happy” Moscow looks like!  The tenor of Platonov’s  story recalls a little bit the Lao Tzu saying that a good person is like water, always going to the lowest places where no one wishes to be, benefiting everyone and harming no one, without striving.  This humble, unglamorous sense of duty is lurking behind many of the scenes in the film.

The melodramatic story of To the Wonder repeats age-old wisdom, suggesting that ascending steps “to the wonder” and the rush of “new romantic love” need to give way to hard work at relationships, and on one’s own desires and subjective reactions to objective circumstance.  But the film addresses all this on the level of emotion and feeling.  It might be fair to call it “trite”, but only when looking at the premise from a cerebral and intellectual position, which is what this film challenges the viewer to reject.  I think this is most true of the semi-urban modern landscapes.  Can the viewer choose to find the beauty in those images and be awed by that beauty?  Can the viewer find a sense of wonder and awe in “trite”, common human situations?

At a deeper level, the film suggests that the main couple’s original desire was built around just the simple pleasures of their tryst and its playful, romantic games so characteristic of “new love”, and any long-term relationship was really perceived as some bonus or unexpected surplus, a kind of insatiable gap of unconscious social expectations never satisfied or bridged by the simple pleasures.  Even the couple’s other affairs that happen later suggest a conscious pursuit of simple sensual pleasures and no more, yet a fundamental void remained unfulfilled by those pleasures because they hadn’t grasped that they were bound to further social expectations.  This is what the film questions.  By the end, the main characters have started to probe and understand their desires, and they decide for themselves to build relationships (though it is ambiguous if that means staying together, or seeking other partners, given the film’s non-linear chronology), accepting simple pleasures along the way for what they are.  The broken flashback approach strengthens this conclusion, by suggesting the memories of simple pleasures remain, re-contextualized in the face of new desires that really go beyond what they were originally.  So, the ultimate choice is one different from imposed social expectations, to instead fashion lives/relationships on the couple’s own terms, but making that choice consciously and without the traumatic, insatiable emptiness of having to constantly convince themselves that they want to accede to social pressures to have a “stable nuclear family” required making the “wrong” choice first.  Like Moscow Chestnova in Happy Moscow, they ultimately opt for a kind of dingy view of relationships, stripped of the glamour of some idealized and unobtainable social conception of the perfect marriage, but with a sense of mutual duty and recognition of what are not fundamental needs, and no demand for martyr status or vindication for past suffering.  (For what it’s worth, episodes in season three of the cartoon TV show Rick and Morty dealing with the character Beth focus on similar issues).  Maybe the ambiguity of the film’s ending suggests that the main characters see relationships as only fleeting, grasped when they can be and relinquished when the cannot hold.  Thankfully, there is no didactic characterization in the film.

Unlike Malick’s early films, which tended to take aim at shibboleths of modern society in ways that had parallels in the counter-culture and high art, To the Wonder is rather more daring in its use of “lowbrow” melodrama, juxtaposed against high-concept cinematography of the type that appeals primarily to viewers who normally look down upon melodrama.  This may be one of Malick’s least regarded late-period films.  But it has things to offer, even if, no, it isn’t up to his first three features — though few films are.  Most detractors seem to focus on the characters being thin, undeveloped or uncompelling, or something like that, but those criticisms seem to miss the point in that they are meant to be shells without their own positive desires, which they try (and at least initially fail) to construct.