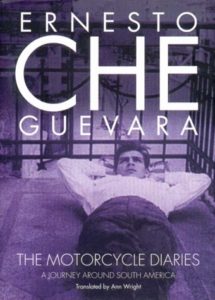 The Motorcycle Diaries is a book based on a diary that Ernesto “Che” Guevara kept while on a lengthy journey through South American in 1951 and 1952 with his friend Alberto Granado.  Guevara was 23 when he began the more than six-month trip, and was still in medical school (in his native Argentina) at the time.  These aren’t raw diary entries, but are eloquently re-written vignettes based on the diary notes.  The prose is excellent, poetic even.  Guevara comes across as a more compelling version of beat writer Jack Kerouac, with more of a sense of purpose and minus the narcissism of Kerouac.  There are a few comments here and there about politics and political economy, but for the most part this is just an engaging coming-of-age travelogue about two bohemian vagabonds getting to know a wider world and its people.  Tennessee Williams‘ character Blanche duBois has the famous line in A Streetcar Named Desire, “I have always depended on the kindness of strangers.”  That more or less perfectly describes Guevara and Granado’s approach to their expedition, as they lacked sufficient funds and provisions and therefore begged, connived, and (sometimes) worked for food, shelter, rides, and other provisions much of the time.  Guevara has a keen eye for character and motivations as he describes the people he encounters.  He also acknowledges the undercurrent of decadence in the trip.  Some editions of the book reprint part of a 1960 speech Guevara gave that nicely adds context to how the expedition shaped his own character, and also contextualizing how such experiences are the sort of thing that are socially necessary in shedding goals that involve striving for individual recognition in favor of advancing common dignity.  After his assassination, Jean-Paul Sartre would famously describe Guevara as “not only an intellectual but also the most complete human being of our age.”  And as Thomas Sankara said about Che in a speech October 8, 1987 commemorating the twentieth anniversary of Che’s assassination, a week before Sankara too was assassinated, that Che “turned his back on the easy road in order, on the contrary, to assert himself as a man of the people, a man who makes common cause with the people, a man who makes common cause with the suffering of others.”  He added, “Finally, let us remember Che simply as an embodiment of eternal romanticism, of fresh and invigorating youth, and at the same time of the clear-sightedness, wisdom, and devotion that only profound men, men with heart, can possess.”  One can get a glimpse of why Sartre and Sankara, and so many others, said these things by starting with The Motorcycle Diaries, which sounds out a portrait of an imperfect human being trying to be better.