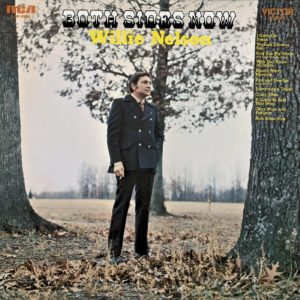 Willie ups the folk-rock influence on this one.  There are a few very decent performances here, like “Crazy Arms” and “Pins and Needles (In My Heart).”  Although many of Willie’s early recordings that looked toward pop/rock music fizzled, the “folk” aspect of this means that there are no cheesy backing strings or horns, and very minimal backing vocals (on “Pins and Needles” the backing vocals recall certain Johnny Cash recordings and anticipate Neko Case‘s entire solo career).  “Everybody’s Talkin'” is a big swing and miss though.  Nothing here is especially memorable, but, overall, this is slightly better than Willie’s next couple RCA albums, which doesn’t exactly say a whole lot.  As another reviewer astutely put it, “All in all, Both Sides Now is a lackluster effort that does hint at his future direction, though it does so rather obliquely.”