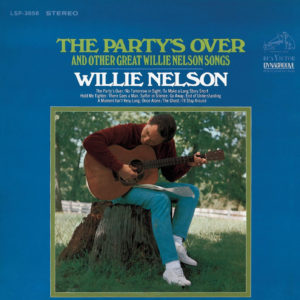 One of the biggest problem’s with Willie’s singing on his RCA albums in the 1960s was his tendency to over-enunciate.  This really put him in a rhythmic straitjacket, and limited his options for vocal phrasing.  Aside from the inherent timbre of his voice, one of his greatest strengths as a vocalist was his idiosyncratic, non-conformist rhythmic phrasing — already evident to some degree on his debut album …And Then I Wrote but generally scaled back over the following decade.  The sort of ragged, welcoming, down-home glory that characterized his most successful recordings from the mid-1970s on finds no room in a typical Nashville “countrypolitan” production style.  But that was kind of the point of middlebrow countrypolitan music, which epitomized the (still racist and sexist) “golden age” of post-WWII American prosperity in which ordinary, uneducated workers saw rising living standards and could see themselves as part of a newly emerging middle class with its own self-styled sophistication — something that might be described as attempting to project an aura of sophistication beyond class boundaries via ideas about “proper” diction and enunciation cribbed from upper classes and merged with lower-class folk/country musical forms.  Looked at another way, the temporary willingness of elite classes to permit rising working and middle classes was fostered by inculcating country music listeners with upper-class values as well as the speech patterns and more urban culture that went along with those values (when elites withdrew their permissive and benevolent attitude starting in the 1970s, the countrypolitan style faded almost in lockstep and is now commonly derided as low-class and unsophisticated).  When it came to Willie Nelson’s career, the thing was, no matter how many great songs he wrote — and he was writing many — he just wasn’t cut out to follow in the footsteps of someone like Patsy Cline, at least not for long.  In the end, Willie was better suited to being a pot-smoking, feel-good layabout with an endearing but weird way of singing that was largely incompatible with the implicit “countrypolitan” agenda of ascending (and reinforcing) a social hierarchy to find a comfortable place in it.  Willie was, in a way, proud of his humble roots — post-fame, he often payed tribute to his childhood musical influences, who were always working-class heroes.  There was room for all sorts of things in Willie best music, but not on The Party’s Over.

The title track here is a keeper, and a “A Moment Isn’t Very Long” clings to enough of a honky tonk feel to be interesting for the first half.  But there isn’t much else here to particularly recommend.  This isn’t a bad record by any means, but Willie is choosing to play by a strange set of rules.  The lachrymose strings on “To Make a Long Story Short (She’s Gone)” epitomize the bland melodrama that swallows most of this.  Excepting Good Times, Willie’s albums got somewhat less interesting in the late 60s, before picking up again in the 70s and then running away with the hearts and minds of listeners by the middle of that decade.