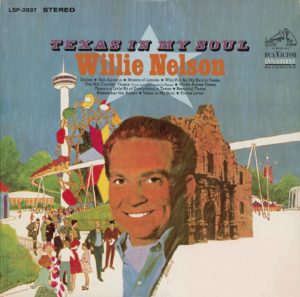 Here is an album that sort of epitomizes the problems with Willie’s early recordings for RCA.  While it is common to hear that Willie’s recordings while part of the Nashville music machine are weighed down by the production, that is somewhat misleading.  Certainly there were some recordings for RCA that were bloated with orchestration and effects that didn’t work — usually due to poor arrangements more than anything.  But most of Willie’s RCA recordings in the mid-1960s had fairly minimal accompaniment.  The biggest problem was that he sounded stiff, forcing himself into a “commercial” sound like a square peg in a round hole, coupled with an unfortunate willingness to pander to commercial gimmicks.  Texas in My Soul is a prime example of Willie’s vocals sounding stiff, as he tries to feign gravitas by singing in a crooner’s style where he holds notes in a resonant way.  In the early 70s he would start to move away from this style of singing, and would shed the last vestiges before his rise to fame in the mid-70s.  The last part of the album gives way to western swing, which would remain a kind of self-indulgent interest throughout Willie’s career.  The title track is a western swing number and is the best thing here.  But, all in all, this is a lesser album.