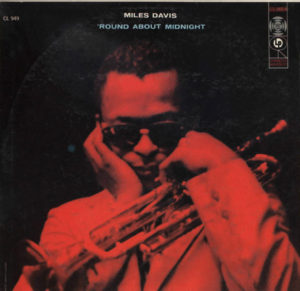 Miles’ first album for Columbia Records is a winner.  While not quite as inspired as his last recordings for Prestige, which included the excellent Cookin’, Relaxin’ and Workin’ discs that for contractual reasons were released only later, this is a mere step behind them, and benefits from more high fidelity recording technology.  The great advantage of the Prestige sessions is that they sound like those of a band that has nothing to lose and everything to gain from superb, heartfelt performances that follow their own muse.  By contrast, ‘Round About Midnight sound more like the work of a talented band seeking to prove that the performers are worthy of the “big time”, so they show more deference.  Anyway, this remains a very worthy collection of hard bop jazz — and album jacket covers hardly get cooler than this one.