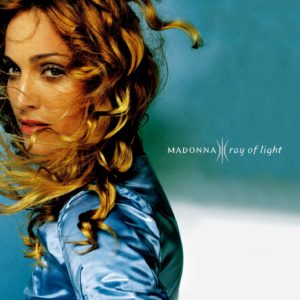 Madonna has had an interesting career.  Her self-titled debut album is a classic of early 1980s dance floor electro-pop.  After that, though, she focused on the sensational aspects of her public persona.  This often meant a hyper-sexualized one.  While there is nothing inherently wrong with that, it often seemed to pander, or at least resort to pandering and filler at album length — she could still knock out great singles.  But by the mid-1990s it seemed almost like she was stuck churning out slightly eroticized pop ballads, and she had taken that about as far as she could.  So Ray of Light was a somewhat daring turn toward electronica, pairing her with producer William Orbit.  The album draws a bit from the down-tempo trip hop scene, but retains a kind of mainstreamed rave dance floor appeal.  This turns out to be one of her best album-length statements.  Nearly twenty years after release, it still sounds good.  Madonna comes to terms with middle age here, in a way.  Maybe it avoids some of the exuberance and daring of her early hits, with more brooding and introspective qualities in their place. But to a certain degree Neil Hamburger had a point with his joke: “What do you call senior citizens who rub feces on their genitals?  Madonna!”  Countless musicians have tried to make a mid-career update, to seem more “with it” and adept with current fads.  The thing is, Madonna pulls off that feat better than just about anybody here.  Nothing about Ray of Light seems like faddish pandering.  And she sings as good as ever here — her vocals are much stronger and extend to a much wider array of techniques than back on her debut.  Too bad all pop albums aren’t this good!