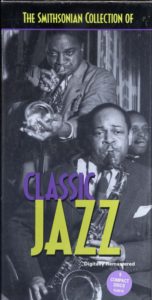 A fantastic overview of jazz from its birth through the early 1960s .  There is probably no better introduction to the genre than this set (this remastered CD version tracks the “revised” edition that came out in 1987).  Granted, at only five CDs (the original, unrevised edition was 6 LPs), it can still only briefly touch on many major periods, and so, for instance, things cut out at the appearance of “free jazz” and only a handful of tracks are from later than 1962.  But there is not a single track on here that is less than fantastic.  Probably one of the best box sets ever assembled, right up there alongside Harry Smith’s Anthology of American Folk Music.  As authoritative as a good dictionary.