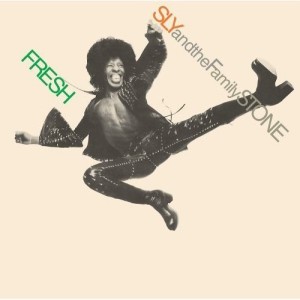 Sly Stone was one of the great pop music producers of his time.  Music collectors obsess over Brian Wilson‘s efforts with The Beach Boys.  Some even joke that anybody obsessively into record collecting will eventually and inevitably end up listening to the Beach Boys.  Those same collectors should devote every bit as much adulation to Sly.

There’s a Riot Goin’ On was a landmark – a dark, murky, angry masterpiece.  But that album came out in 1971.  It was still the height of black militancy in America.  Things were starting to change though.  Late in 1971 the Powell Memo was issued, beginning the conservative business backlash against progressive social causes. Even the Black Panthers, one of the most visible militant black organizations, shifted tactics and started to devote energies to electoral politics.  For instance, Bobby Seale ran for mayor of Oakland in 1973 — just across the Bay from the San Francisco home of Sly & The Family Stone.

Fresh opens with “In Time,” a funky workout that highlights some of the innovations the album establishes.  The rhythm section of “The Family Stone” had (mostly) departed.  So instead of relying on individual ingenuity and improvisation from each player, Sly uses the song’s structure and arrangement to create its appeal.  The horn charts are the best example.  In isolation, the horn charts use fairly conventional soul/R&B harmonies.  But Sly chops them up.  The horn section plays little riffs that don’t seem to resolve fully, interrupted to create a rhythmic emphasis using what is nominally harmonic. There is some sinister sounding organ and short, punchy guitar stabs.  Underneath everything is a buoyant, throbbing bass line.  The percussion is a combination of a drum machine (a rather new invention) and a real live drummer.  Taken all together, the song emphasizes a kind of juggling act between the demands of bland commercial music of the sort that simply perpetuates the status quo.  The funkiness of the rhythms of “In Time” are kind of radical.  Yet those horn charts are certainly cognizant of an existing social landscape that assigns an established value to them.  Sly was synthesizing these two opposing sentiments.  It works because of the unique relationships between the instruments in the album’s mix.  The drums and bass, and hard syncopated rhythms in general, take a very prominent role.  The melodic and harmonic elements, even the lyrics, frequently seem to be fit around the rhythms rather than the other way around, which would be more conventional.

“If You Want Me to Stay” has Sly singing in this great high-pitched, croaking voice, with intentionally stilted and rushed rhythmic phrasing.  It may not seem like it on the surface, but this is Sly offering a kind of crypto-autobiographical statement on multiple levels.  The song might be said to rely on masking, with one reading being strictly about romantic entanglements (in relation to his future wife Kathleen Silva), but with another reading being about his position as a celebrity musician being pulled in different directions and trying of being a kind of spokesperson for a generation.

The best-known song on the album is undoubtedly the cover of “Que Sera Sera (Whatever Will Be Will Be),” with vocals by Rose Stone.  The song was song originally popularized by Doris Day in a bright yet rigid reading used in a film.

Fresh was not a complete critical success at the time.  It was a huge commercial hit, but not quite as big as immediately prior releases.  And that trend continued.  Within a few years Sly would start to seem irrelevant.  As reviewer yerblues wrote about Sly & The Family Stone’s 1976 album Heard Ya Missed Me, Well I’m Back, “If there’s one word that sums up Sly Stone’s approach here, it is capitulation. The originality that had formerly been a hallmark of the group’s recordings is wholly absent here.”  In those later years there was more emphasis on commercial success, even if it meant chasing dull fads, and integrity in holding to certain ideals (or a cause) was discarded.  If Sly had almost entirely capitulated by 1976, that question was on the table already years earlier.  In 1973 his approach was still in flux and not at all settled.

Certainly, there were other soul/R&B acts that faced similar pressures in the early/mid-1970s.  Gladys Knight & The Pips‘ Neither One of Us (1973) also develops the sense of conflict and apprehension at a time when black militancy was waning and facing significant defeats.  Curtis Mayfield had his best albums behind him by the mid-70s, as the militant urgency of his earlier solo work faded or just seemed out of step.  Stevie Wonder might be the best parallel to Sly, using programmed bass in a way that ran in parallel with Sly’s drum machine experiments.  Though Stevie managed that by switching between switching between socially conscious material (“Living For the City,” “Pastime Paradise”) and nostalgic and romantic singer-songwriter stuff (“You Are the Sunshine of My Life,” “I Wish”) — with a somewhat greater volume of the latter.  Stevie almost had to slip in the former among a sufficient number of the latter.  Marvin Gaye‘s What’s Going On (1971) seemed to set the tone for a lot of early 70s soul music.  Just a few years later, though, Gaye released Let’s Get It On (1973), a funkier but also more personal album that — great as it is — can be seen as a turn away from broader social movements and toward individual issues.  This mirrored Sly’s approach.  His next album, Small Talk (1974), would turn toward domestic concerns and away from songs about social consciousness.

The sub-genre of Philly Soul makes another great example of the trends in early 70s soul music.  The O’Jays released Ship Ahoy in 1973.  It is an album that presents itself as socially-conscious, up to and including a cover image of the band depicted in the hold of a slave ship, yet most of the songs push a staunchly conservative/reactionary agenda, or at least trot out familiar conservative tropes.  Take “For the Love of Money.”  Its an iconic song, and one of the best-known O’Jays tunes — second only to “Love Train.”  It lambasts being “changed” by money, and the ills of an obsession with money.  That is an old christian sentiment — bringing to mind how Jesus threw the money-changers out of the temple in Jerusalem.  This might almost be seen as an anti-capitalist song.  But it isn’t really.  It is more about deflecting attention from structural economic inequality and lack of jobs, etc.  This is illustrated by another song from Ship Ahoy, “Don’t Call Me Brother.”  That song, despite its catchy vocal harmonies, is a lecture in “personal responsibility.”  It advocates pull-yourself-up-by-your-bootstraps, rugged individualism that suggests individual decision-making is both necessary and sufficient to alter social outcomes and that social and economic issues (poverty, joblessness, incarceration, etc.) are no more than the aggregation of disparate individual decisions, rather than the products of collective and institutional mechanisms that produce, reproduce and transform social and economic relations and relegate individuals to certain positions and limit their scope of free will.  “Don’t Call Me Brother” is exactly the sort of conservative philosophy that people like serial rapist Bill Cosby have long advocated (with maximum elitist condescension).  It is also precisely the sort of worldview that suggests the black power/freedom movements are irrelevant, and that the status quo is self-justifying and inherently optimal.

So, turning back to Fresh, we have Sly offering up songs like “If It Were Left Up to Me” — with the lyrics, “If it were left up to me / we could put ideas in motion” and “now that it’s left up to me, and you / will you try? / will you try? / I promise from me to you, I will try” — and “Que Sera Sera (Whatever Will Be Will Be).”  There is a recognition in these songs of the difficulties facing black militancy, black nationalism, the whole hippie thing, and related causes.  Yet there is both determination and perseverance on display in the face of those challenges.  Despite perhaps getting worn out from a lifestyle of partying and drugs, and the difficulties of being a public figure, Sly was still fighting for the same causes as on Dance to the Music, Stand! and There’s a Riot Goin’ on.  But at the same time he was aware of all the changing times and circumstances, and those changes are reflected in his music on Fresh.  He puts into musical terms a new sense of meaning for the new circumstances around him.

Sly tinkered with this album incessantly, and there are alternate mixes of much of it floating around (including as bonus tracks to a reissue).  The result is probably the flat-out funkiest album Sly ever made.  It was hugely influential on a lot of musicians.  Some fans rate it a little less than some of the preceding albums.  I think it is top-shelf stuff, among the essentials.  Then again, Sly & The Family Stone are a very formative musical influence for me.  Fresh is an album I loved form the first time I heard it, and decades later I still love it.  Perhaps I’m a little biased.

Hard to imagine anyone hating this one, but for some this might be one of those game-changer type musical experiences, just as much as Sly’s other best work.