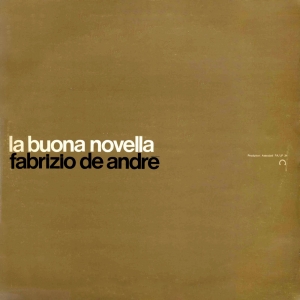 La buona novella (translation: “The Good News” or “The Good Book”) is a concept album about Jesus.  It draws from both the canonical New Testament and the Biblical Apocrypha.  On “Laudate hominem,” the closing song, De André sings, “I don’t want to think of you as son of God, but son of man, even brother of mine.”  He had this to say about the album in 1998:

“When I wrote La buona novella it was 1969. At the time we were in the very middle of the students’ protests, and less attentive people, which are always the majority among us — comrades, friends, people of the same age as me — regarded that record as anachronistic. They told me: ‘What’s this? We go fighting inside universities and outside universities against abuses, and you instead tell us the story, which moreover we already know, of Jesus Christ’s preachings?’ And they did not realize that the Good News was meant to be an allegory, it was an allegory that consisted in a comparison between the better and more sensible instances of the revolt of ’68, and some instances, certainly higher from a spiritual point of view, but similar from an ethical-social point of view, raised by a gentleman, 1969 years before, against the abuses of power, against the abuses of authority, in the name of egalitarianism and universal brotherhood. That man was called Jesus of Nazareth. And I think he was, and remains, the greatest revolutionary of all time. When I wrote the album I didn’t want to venture into roads or paths that would be difficult for me to travel on, such as metaphysics or even theology, first of all because I don’t understand anything about those, secondly because I always thought that if God did not exist we should invent Him, which is exactly what Man has done ever since he set foot on Earth.”

When put this way, it is clear that he was looking at christianity in a similar way as film director Pier Paolo Pasolini, who wrote the screenplay St. Paul around this time but was unable to find funding to film it.  (Pasolini also made the trite Gospel According to Matthew).  They both were interested in the radical underpinnings of christianity, viewed from an atheistic point of view.  It is a perspective that has gained some traction in academic philosophy in more recent years (Saint Paul: The Foundations of Universalism; The Fragile Absolute — or, Why Is the Christian Legacy Worth Fighting For?).  Actually, musicians and others have for some time argued that Jesus was a communist.  For that matter, Ernst Bloch‘s Atheism in Christianity touched on this approach back in 1968, as did Thomas J. J. Altizer‘s earlier “death of god” theory.  At bottom all these are attempts to link the foundations of (purely atheistic, materialist) egalitarianism to the revolutionary content of early christianity, separate from the way the christian church has evolved (especially since the Roman Empire).  La buona novella can also be seen as something of the polar opposite of the rock opera Jesus Christ Superstar, which debuted on Broadway the following year and dwelt on the melodrama of being a messiah — in the superficial trappings of hippie garb.

The melodies here are memorable.  De André applies his wonderfully smooth, resonant voice to treatments that might be called folk-rock mixed with christian chorale music.  These recordings can be appreciated even by listeners who do not speak Italian.  Yet De André is renowned as a lyricist.  Reading translations of his lyrics by themselves is worthwhile.  (There are translations available online.)

One of the best songs here, “Il testamento di Tito” (“Tito’s Will”), includes the lyrics:

“honor the father, honor the mother
and honor also their rod
kiss the hand that broke your nose
because you asked for a morsel

This is more than a bit reminiscent of Luke 14:26:

“If any man come to me, and hate not his father, and mother, and wife, and children, and brethren, and sisters, yea, and his own life also, he cannot be my disciple.”

The story draws from the Syriac Infancy Gospel and is narrated by Tito/Titus, the so-called “good thief” or “penitent thief” (also called Dismas).  Tito describes himself violating nine of the ten commandments, unrepentant, with “though shalt not kill” violated by those crucifying him.  The last lines of the song are Tito saying,

“I, in seeing this man who is dying
Mother, I feel sorrow
in the piety that doesn’t yield to resentment
Mother, I learned love.”

This is the essence of christian universalism, by taking the criminal (of a low social strata) and making his acceptance of the duty of christian love — agape, love as charity or “political love” by choosing to act like the Holy Spirit — an example of gaining direct, personal access to the universal, depicted in a positive light (rather than as a usurpation or transgression).  There is still no transcendence.  The thief dies, and so does Jesus.

De André is known for his sardonic criticisms of the catholic church, a major institution in his native Italy.  His popularity there arguably maintained or increased after his death.  A bit like Camarón de la Isla in Spain, he is a people’s musician, an iconic champion for the marginalized (even as De André came from a well-off family).