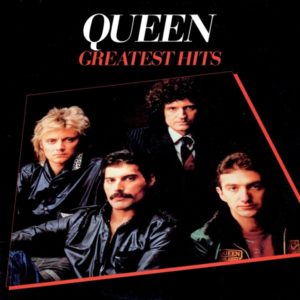 Great stuff really.  These hits are still ubiquitous.  And they deserve to be.  What struck me listening to this for the n-th time was how the techniques that Queen use are not altogether that different from the ironic, kitschy mash-ups of tropicália, though this is undeniably camp rather than social protest music.  But the underlying musical techniques have similarities.  Susan Sontag famously wrote that camp was characterized by artifice, exaggeration, a conversion of the serious to the frivolous, and naïve unpretentiousness.  Even with the very exaggerated, flamboyant frivolity of something like “Bohemian Rhapsody” or even “Don’t Stop Me Now” there really is hardly a whiff of pretension.  The band never blinks no matter how silly the premise.

One thing I’ll always remember about Queen is that a guy I used to work with (in retail) would stroll along at work and sing “Killer Queen” (or at least a verse or two over and over again) in a kind of stoner drawl.  That kind of sums up Queen for me: a band that is a distraction, an escape, greasing the wheels of daily life, and completely and totally okay with being that and no more than that.  The thing to question about something like that is how it tends to justify the status quo, no matter what that is, but , still, few convey a poignant sense of motion holding distinct concepts in a particular relationship to each other quite like Queen.  As one person put it, “The great thing about Queen was that they could unite both meathead jock-rockers and sexually adventurous drama nerds, whether those two groups wanted to be united or not.”

This collection of hits is all you need from the band.  There are also Vols. II and III, but those get lame quickly.  Sure, there is still room to quibble with a few of the selections here, like the lack of “Under Pressure,” and “Flash” belongs at the very end.  But those are minor concerns.