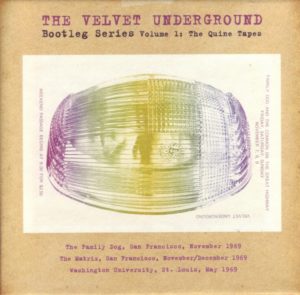 The Quine Tapes is essential for any true Velvet Underground fan. Recorded from dates on the same tour as 1969: Velvet Underground Live With Lou Reed and The Complete Matrix Tapes, this “Bootleg Series” release is decidedly of amateur recording quality (the series’ title is honest at least). Robert Quine was one of the handful of Velvet Underground superfans in their day (Quine later co-founded The Voidoids and then played with Lou Reed).  These recordings were made with a cassette recorder in the audience (the sound quality of the recording being comparable to The Stooges‘ Metallic KO and Television‘s The Blow-Up). Disc One is material from the Family Dog in San Francisco, while Discs Two & Three are primarily from the Matrix in San Francisco, with just one medley from Washington University in St. Louis.

Disc One’s “Foggy Notion” takes the song on an extended and explosive guitar solo (one of the set’s gems). Disc Two’s “White Light/White Heat” is both aggressive and precise. Disc Three’s early version of “New Age” is profoundly inspired and features different lyrics than later appeared on Loaded. “Black Angel’s Death Song” is different without viola, but retains all the essential elements. Of course, the importance of The Quine Tapes lies in the three versions of “Sister Ray” included, clocking in at 24:03, 38:00 & 28:43 on each respective disc. Surprisingly, these versions often move in and out of slow grooves amongst powerful bursts of beautiful noise. “Sister Ray” is probably the greatest rock song but only when performed by the Velvets — other artists attempting the song are asking to be made fools. My money is on the “Sister Ray” recorded at the Family Dog on 11.7.1969 (from Disc One) as the finest recording in this set.

The Quine Tapes features many extended song performances. This album proves that the Velvets with Doug Yule were a different band than the Velvet with John Cale but still a great band. Without compromising any creativity, the Velvets do their best to entice people into their music. Blending songs that never made it onto any studio albums with many of the group’s most experimental numbers from years past, The Quine Tapes allows you to put the 1969 Velvets in context. Fans will perennially wait for the “holy grail” of live recordings with John Cale still in the band, but they just don’t exist (else they would have been released by now)!

The Quine Tapes goes far beyond 1969: Velvet Underground Live in sheer breadth. Only one recorded song overlaps between the two albums.  There is considerable overlap with The Complete Matrix Tapes, with that later release having supposedly higher fidelity.

While it can be somewhat frustrating when these bootleg recordings distort or fail to capture the entirety of the performances, the sheer brilliance of the Velvet’s musical ingenuity makes up for a lot of that. This isn’t a definitive Velvet Underground live recording. Nonetheless, The Quine Tapes is a portrait of the Velvet Underground as stylists rivaling anyone. The improvisational variety of songs within this release, much less compared to others, is astounding. There are no signs of the band’s (effective) demise looming a few month ahead. Maybe the album takes some effort but rarely in music are the rewards so great.  This set is good for a VU fix no matter how severe.