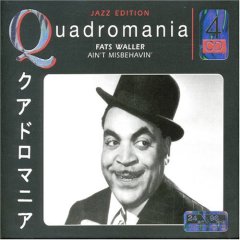 Without a doubt one of the greatest stride pianists in jazz, and arguably THE best.  Not only was Fats Waller a great piano player, he was a consummate songwriter and stylist able to turn out recordings with impressive speed and regularity.  Probably his greatest strength was being able to take literally any song, no matter how bad, and turn it into something fun, charming or sometimes even impressive. Waller and also his band–typically small combos — always featured impeccable musicianship.  It really is a shame that Waller and others from his era, like Fletcher Henderson, haven’t received as much attention from modern jazz listeners as they probably deserve.

There are four solid CDs worth of material here recorded between late 1935 and early 1943, and not really a bad track amongst it all.  A tremendously rewarding and enjoyable set to hear.  While this may not be a definitive selection of Waller’s material — fair enough considering the formidable quantity of recordings he left behind in his short life — it never ceases to sound great.  The remastering is aces.  A more comprehensive overview of his career is If You Got to Ask, You Ain’t Got It!, but you still can’t go wrong with this set.