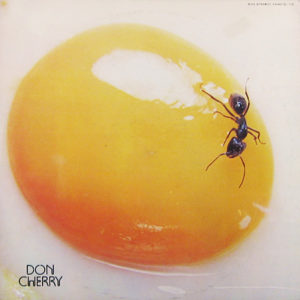 A live album featuring tracks recorded at concerts in France in April and August of 1971.  This is world fusion jazz, continuing in the tradition Cherry had established on such prior recordings as Eternal Rhythm and “mu” First Part & Second Part.  While this might be less than those other efforts, it is still mighty fine.  Cherry gained renown working with Ornette Coleman, and he seemed to draw from Coleman a kind of anarchic sense of egalitarianism.  But while Coleman’s music presupposed mostly a base in American musical forms, working primarily with players steeped in bebop, blues, R&B, and rock, and balancing individual performances within those realms, Cherry took musics from different cultures and placed those different cultures on equal footing.  Coleman worked with mostly monocultural styles, or at most with roughly binary juxtapositions of jazz and euro-classical composition.  On Don Cherry (confusingly, one of a number of self-titled albums he released, but helpfully renamed Orient for reissues), there is room for extended passages, plus many shifts of styles, with a density that is semi-intimate while retaining a sense of fullness.  Probably not the place to start with Cherry’s music, but a worthwhile stop in his catalog for fans of his other work.