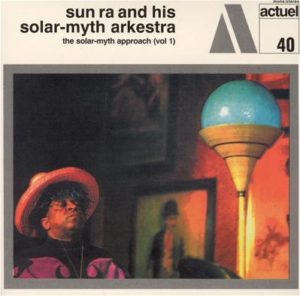 Like Space Is the Place and Soundtrack to the Film Space Is the Place, The Solar-Myth Approach (Vol 1) is a very broad and eclectic sampling of various musical forms Sun Ra and his Arkestra had developed up through the early 1970s.  Early on there is a short space chant with “Realm of Lightning” (better known as “Outer Spaceways Incorporated”).  “Seen III, Took 4” is a somewhat rare look back to the abstract experiments of the group’s early days in New York City, something akin to Cosmic Tones for Mental Therapy.  “They’ll Come Back” starts with more exotic sounds and a very persistent bowed bass, but eventually transforms into “Ancient Aiethopia,” a song the band had been performing since the 1950s.  The rest is mostly pretty percussion-heavy, with the soloing tending toward the difficult.  The sound here is a bit lo-fi, and the performances may not quite be top-tier, but despite those potential concerns this would still make a fairly good introduction to the work of Sun Ra, especially for more adventurous souls — with the caveat that there are even better recordings out there from the group ready to be heard.