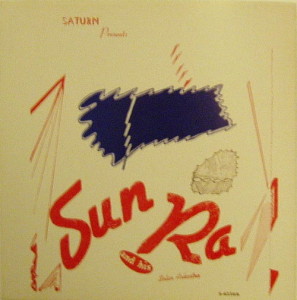 One of the more difficult Sun Ra albums, but a great one too.  It was recorded in 1963.  Like some of the other recordings from the early 1960s in New York this features vaguely psychedelic reverb effects.  These recordings are the most effective of Sun Ra’s experiments of the era.  The reed players are stretching (“Voice of Space”) and laying the foundation for what they would do after the October Revolution in Jazz the following year.  While the band had experimented with dissonant, spacey sounds for years, they use those techniques for longer, sustained stretches on many of these songs.  The polyrhythmic percussion finds new life here by bridging the newer recording effects and soloing with sci-fi exotica stylings the band had used for years.  That is to say that this actually marks a break from the merely superficially “exotic” approach of the prior years, giving way to something a lot less bound to conventional swing and bop structures and more able to float about purely on moods and washes of sound.  If this doesn’t sink in right away, give it time.

[Historical note: This music was recorded in New York City in the early 1960s, but was inspired by a performance at the Edward Hines, Jr. VA Hospital in Chicago on February 28, 1957, at which a (formerly) catatonic woman who supposedly hadn’t spoken in years exclaimed at the end of the performance, “You call that music?!”]