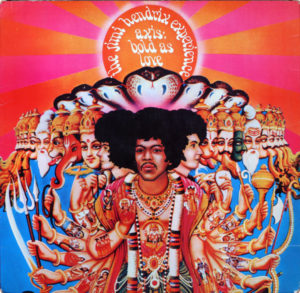 Often considered the weakest of the three Jimi Hendrix Experience studio albums, I happen to like this best.  The album has a refined but still straightforward and guileless sound, heavy at times, but with plenty of rock ballads too; melodic, with a hard psychedelic edge.  The themes are a little more humble, perhaps, and even more equivocal than brash stuff like “Voodoo Child (Slight Return)” or “Foxy Lady.”  Frankly, the studio experimentation of the follow-up Electric Ladyland obscures rather than augments what was best about Hendrix’s music in my opinion, and the eclecticism makes my attention wander.  Hendrix was a great blues player, but sequencing lengthy blues tracks next to psychedelic rockers doesn’t work for me.  Thankfully this album sidesteps much of that.  There are no blues tracks here to grind the pace of the album to a halt.  As a result this has more intimacy.  Also, there is a mysticism and spirituality that binds most of the material together nicely.  Before release, some of the master tapes were lost and had to be recreated from secondary sources (early takes dubbed to other media), which might have been a plus or minus, or both.  This may not have as many well-known individual songs as other Hendrix albums — though it does have “Little Wing” and “Spanish Castle Magic.”  But as a whole this is probably the most listenable front to back — the awesome debut Are You Experienced comes in right behind it though.