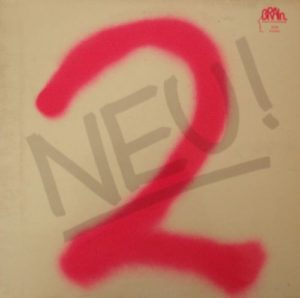 Neu!-beat is as distinctive as anything to emerge from the 1970s.  It also became essentially the standard for pop music decades later. Unfortunately for Neu!, their record label and most of the record-buying public didn’t care much at the time.

Neu! was a splinter faction of Kraftwerk. Their music stands entirely on its own though. Neu! is at least as important as their parent group. Their second album volleys back and forth between the influence of Klaus Dinger and Michael Rother. The tension on Neu! 2 has anarchistic rebellion matched against catchy electro-dance rhythms.

The often-told story of how the record company gave up the album and left Neu! to re-edit and remix three tracks to fill out the disc is fitting but unsurprising — even the album cover is a “remix” of sorts from their debut. It certainly didn’t help their popularity that Neu! was an instrumental band — one that maybe fell between the cracks of rock and roll and avant-garde modern classical.

“Für Immer (Forever)” begins the first of two suites. The chaos creeps in slowly. “Spitzenqualität” has swirling drums and electronic sounds to rival Karlheinz Stockhausen (most assuredly an influence). With “Lila Engel (Lilac Angel),” the processed vocals and aggressive beats channel Neu!’s angst into creative salvation.  Neu! has pulled you from a passing experience to something more total.  The duo intrigues the listener as they wear away expectations.

“Neuschnee 78” (one of the remixed songs) begins the second suite with an almost inappropriate calm. When “Neuschnee” arrives a few songs later, the second side opener suddenly seems paranoid in retrospect.  “Super” also provides the remixes “Super 16” and “Super 78.”  Each progression of remixes actually starts with the remixes and works backwards.

Neu! 2 adds layers then strips them away.  Adding just a tiny piece to existing material puts the entire thing in a new perspective.  The duo then zooms towards what debatably is the essence of the songs. The album’s most unique feature is the way it makes these athletic transformations wholly within itself.  While precision is what makes this album what it is, at the same time the music does away with that which is formal and regulated.

Neu! was just ahead of their time.  Neu! 2 is as likable as it is cool, and it’s pretty cool.