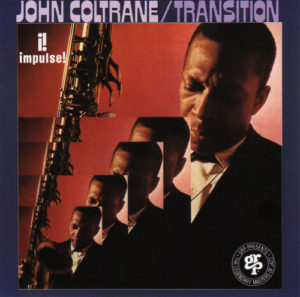 If this album was from anyone other than Coltrane, I might be tempted to praise it more.  The performances here are all superb, and Coltrane is in his prime.  Musically, it’s very similar to A Love Supreme, though without the same intense focus and unity of vision.  At times, the performances here hint at what the group accomplished on Meditations.  Perhaps the main drawback of the album is the fact that the second track “Welcome” is pretty weak by Coltrane standards and that totally disrupts the flow.  But also Transition is an archival release that was tampered with on at least one reissue, which further hampers the allure of the album due to the fact that the added tracks had been previously released on another album (one of those being “Welcome”) and one of the original tracks (“Dear Lord”) has been omitted.  Then again, those are petty concerns.  In all, this is still a worthy and thoroughly enjoyable album, but I must admit that in terms of importance to both 1960s jazz and Coltrane’s discography it falls just shy of being essential.